Spidey seeks compensation for his heroics from the Fantastic Four!

Spider-Man may have debuted in the pages of AMAZING FANTASY #15, but he proved so popular that Stan Lee and Steve Ditko started dreaming up his solo series a few months later in the pages of AMAZING SPIDER-MAN #1 from 1963. Though a great deal the most well known building blocks of the character were laid in the first appearance, this issue adds plenty more from his struggles with money to his new dynamic with Aunt May.

After angrily recounting the events that lead to Peter’s understanding of the relationship between power and responsibility, the young man overheard Aunt May asking for more time to pay her rent. Parker briefly toyed with the idea of quitting school to get a job or even resorting to theft, but ultimately decided to give show business another shot to make some extra scratch.

Unfortunately, he couldn’t be paid in cash, so he received a check, but the bank refused to cash it. Spidey failed to score a second appearance thanks to journalist J. Jonah Jameson railing against the hero both in “The Daily Bugle” and during his lecture circuit. The mustachioed one seemed mainly concerned about kids imitating his amazing feats and the attention being drawn away from real heroes like his own son, astronaut John Jameson. 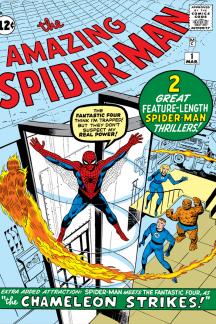 While still struggling with financial woes, Spider-Man leapt into action when John Jameson’s space capsule malfunctioned. The space technicians had the component, but no way to get it on board until Spidey burst in, grabbed the part, hijacked a military plane, and webbed onto the capsule! Figuring that he’d be lauded as a hero, Peter crumbled when he opened the paper to see JJJ ranting about how the Wall Crawler had set the whole thing up just to make himself look good!

Still wondering how to make this whole hero thing work to his advantage, Peter decided to try a new path: joining the Fantastic Four! Of course, he didn’t just walk up and ask to see them; he broke in to their HQ, which led to one of the most classic of comic occurrences: the hero vs. hero fight! Web Head swung away after discovering that the FF didn’t make any money on their exploits!

The act put Spidey in the spotlight again which drew the attention of The Chameleon, a master of disguise who used his skills for nefarious purposes. So, the villain put on a Spider-Man costume and wielded a web gun to make the amazing arachnid look anything but. Though his plan almost worked and plenty of people continued to worry about Spider-Man’s true intentions, Chameleon still wound up in jail courtesy of our hero!

Spider-Man burst into the Baxter Building with far too much bravado and even fought The Human Torch briefly in this first meeting. A few months later, Spidey crashed Torch’s party in an attempt to steal his girlfriend  in AMAZING SPIDER-MAN #8. In issue #18, Johnny Storm admitted to actually liking the Wall Crawler and even reached out to him about not giving up the crime-fighting life. They teamed up for several stories and soon become very good friends. If you’re a fan of their dynamic, check out SPIDER-MAN & HUMAN TORCH IN…BAHIA DE LOS MUERTOS and SPIDER-MAN/HUMAN TORCH!