Do you remember your high school graduation? For a lot of us, the event offered something of a sigh of relief as we put one stage of life behind us and prepared for the next. Sure, we may have had trouble sitting through the speeches, but aside from nerves about tripping on your way to get that diploma, no huge challenges presented. Peter Parker had a lot more going on in Stan Lee and Steve Ditko’s AMAZING SPIDER-MAN #28 from 1965. While other Midtown High students ran around getting their caps and gowns, Peter headed over to Dr. Smythe’s lab to get his Spider-Man costume back.

After Spidey switched his actual costume for a store-bought one, Smythe’s assistant Mark Raxton burst in demanding his share of a liquid metal alloy they developed together so he could sell it off and make some quick cash. Peter tried to stop the escalating altercation, but Smythe’s spider-sensitive traps caught him. He watched helplessly as Raxton knocked Smythe out and then tumbled backwards, cracking the jar against a wall and spilling the alloy all over himself.

Out in the world, Raxton realized his new form offered him super strength, some degree of invulnerability, and a numbness to pain. He quickly christened himself “Molten Man” and went to his apartment to plan his first big super villain crime. Spider-Man popped up soon after he arrived and started to brawl. In true Spidey fashion, Peter worried about showing up to graduation with face bruises. The concern proved appropriate as Molten Man shrugged off Web-Head’s strongest blows and webbing proved nearly useless. 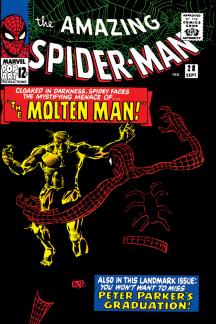 Eventually the brawl led down into the building’s basement where Spidey killed the lights and used his webbing to bind Raxton’s arms and legs together. The villain still had some fight in him, but the Wall-Crawler did the major lifting so the arriving cops could haul the heavy in.

Back home, Peter and Aunt May had a nice moment where she shared her pride over her nephew’s accomplishments. At the actual ceremony the principal announced that both Flash Thompson and Peter received scholarships to Empire State University. Afterwards, J. Jonah Jameson worked to get Peter back as a Daily Bugle photographer and Liz revealed that she’d had a crush on him all this time!

And with that, Peter Parker left the life of a high school student behind to move on to bigger and better things!

As it turned out, this would be Liz Allan’s last appearance for over 100 issues. In AMAZING SPIDER-MAN #132, Gerry Conway and John Romita reintroduced the character by having her bump into Peter on the street. While she rested at Mary Jane’s place, Spider-Man ran into another familiar face: Molten Man! They fought and the villain escaped, leaving Peter with some kind of radiation poisoning. The story carried over into the next issue in which Liz revealed Raxton to be her stepbrother. After high school, she got a job as a nurse to help take care of him. Mark got fed up and escaped, but the lack of treatment made his moniker all the more true with each passing day. Liz stuck around the Spidey books for a while and even married Harry Osborn for a time. After that fell apart, she moved over to DAREDEVIL and started seeing Foggy Nelson.

Between college pressures and Aunt May’s illness, Peter Parker nearly gives up in the pages of AMAZING SPIDER-MAN #31–33.