High school’s rough for anyone, whether you’re a web-slinging superhero or a teenage girl with a crush on one. Sean McKeever and Takeshi Miyazawa explored the latter with a series of books called MARY JANE, MARY JANE: HOMECOMING and two volumes of SPIDER-MAN LOVES MARY JANE, though other creators helped bring the story to a close. 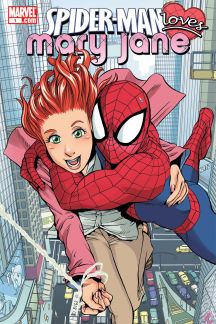 Set in an alternate universe in which Peter, Harry Osborn, Mary Jane, Gwen Stacy, Flash Thompson and Liz Allan all attended high school together – Peter met Harry and Gwen in college in the 616 – these stories explore Watson’s ever-changing feelings for the masked man of her dreams!

Initially launched with the four issue limited series MARY JANE in 2004, the overarching story focused on a young woman dealing with the intensity of her feelings while creating a carefree persona. Mirroring the reasons readers initially fell in love with Spider-Man, Mary Jane worried about making money and appeasing her parental units, but not to make web fluid, she wanted to go to the homecoming dance. 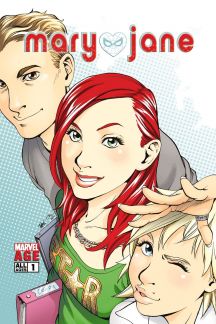 In fact, much of the drama in this series revolved around the big dance, MJ’s desire to buy the perfect dress for it and also figure out who she wanted to go with. She and Harry Osborn might have seemed perfect for each other on paper, but she had another in mind: Spider-Man.

Of course, her best friend Liz Allan thought her crazy for wanting such a thing, but she really lost her mind after seeing MJ and Flash in am apparently romantic moment!

All the while, a nerdy kid named Peter Parker started appearing more and more in Mary Jane’s life, first as a tutor and then as more of a friend. We all know how that relationship evolved in one version of the Wall-Crawler’s history, but to see what happens in this one, you’ll just have to read all of SPIDER-MAN LOVES MARY JANE which ended with a five issue limited series second season volume in 2009.

While MARY JANE and SPIDER-MAN LOVES MARY JANE didn’t see the title character become a super hero, that’s not the case with every other version of MJ from the various realities. In EXILES we met a version of Watson who not only became Spider-Woman, but also joined the Avengers as seen in EXILES #20. She and the dimension-hopping Sunfire strike up a relationship as they all battle the spreading threat of the Phalanx aided by Asgardians. Later, during a time when the team found themselves displaced on various dimensions, Sunfire and MJ got to spend six weeks together before the Exile teleported away on another adventure.

In the next installment we take a look at the all ages books SPIDER-MAN ADVENTURES!