Will the Wall-Crawler allow mounting pressures to crush him?

Starting college can be crazy-stressful. You’ve got to get a handle on the campus layout, figure out where to take your classes, get all your books and meet the new people you’ll spend most of your life with. As you can imagine, the first day of school for Peter Parker comes filled with trials and tribulations galore!

Starting with 1965’s AMAZING SPIDER-MAN #31, Stan Lee and Steve Ditko started putting the Wall-Crawler through some intense paces. First, he battled some masked and uniformed crooks stealing radioactive devices for The Master Planner. They distracted him long enough to get the stolen goods away, survived a helicopter crash and escaped with SCUBA gear.

The next day, Peter headed to Empire State University for class registration. That night he returned home and Aunt May fainted. He called a doctor who in turn requested an ambulance to take the frail woman to the hospital. Once she got settled and dozed off in her hospital bed, Peter left May and returned home—but didn’t sleep a wink because of worry and guilt. 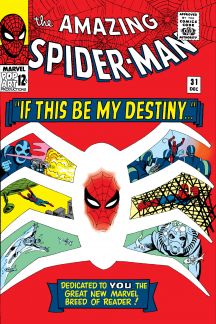 That put Peter in a less-than-great mood on his first day of school where he blew off brand new characters Gwen Stacy and Harry Osborn repeatedly. By the next issue, Parker’s fuse has run shorter than we’d ever seen. Why? Because he learned that Aunt May’s got radiation poisoning from living with him all these years! All this, and Doctor Octopus revealed himself as The Master Planner!

Spidey then enlisted Dr. Curt Connors to help figure out how to heal Aunt May. They ordered a serum that got stolen by Master Planner at the airport which sent Spider-Man on a searching rampage. This led him to Doc Ock’s underwater headquarters where he unleashed his anger. This actually brought a ton of machinery down on top of him, not to mention water from the river overhead.

In AMAZING SPIDER-MAN #33, broken, beaten, and close to drowning, Spider-Man dug deep, thought about Aunt May and Uncle Ben, and eventually lifted the rubble off of himself and got out before the water rose too high. On the way out, he grabbed the serum, deliriously fought off Master Planner goons, returned to Dr. Connors, and successfully saved his aunt!

Noted Spidey scribe Dan Slott referenced the battle between Spider-Man and Doctor Octopus in the underwater lair in the pages of SUPERIOR SPIDER-MAN #19. At that time, Otto inhabited Peter’s body, but could also access his memories. In doing so, Octavius allowed the Parker personality to dig itself out of the rubble it had been buried under since the ninth issue of that series, eventually paving the way for Peter to regain control of his body, move back over to AMAZING SPIDER-MAN and take on the epic challenge of Spider-Verse.