Travel all the way back to the amazing arachnid’s origin story!

Given Spider-Man’s status as a star of comics, screens big and small, and even the stage, his origin has been retold so many times that you’ve probably got all the major beats memorized. Bullied Peter Parker got bit by a radioactive arachnid that granted him amazing powers. At first, he used them for his own gain, selfishly letting an armed robber escape. Said thief proceeded to kill Uncle Ben in a hold up after the man passed on a key piece of wisdom to his nephew: “With great power comes great responsibility.” With that, Peter dedicated himself to using his powers for the good of the community.

However, there’s something special about going back and reading the actual first appearance and see exactly what Stan Lee and Steve Ditko put on the page in 1962’s AMAZING FANTASY #15.

Right away, readers met a Midtown High student named Peter Parker who his classmates referred to as a bookworm and a “professional wallflower.” Though he’s very intelligent, especially in the sciences, Pete just can’t get girls to give him a second look, especially with guys like quarterback and bully Flash Thompson around. Luckily, Parker’s guardians Uncle Ben and Aunt May were around to make him wheatcakes and take care of him. So, while life might not exactly be spectacular for the kid, it could have been worse.

Then, everything got flipped when, while attending a presentation of “experiments in radio-activity,” the young man found himself on the end of a nasty irradiated spider bite. Feeling queasy, Peter ran out into the street where he jumped about 10 feet in the air and stuck to a building when a cab almost hit him. After crawling up the rest of the building, Parker realized he also exhibited enhanced strength and incredible balance.

Without thinking twice, the youth entered a contest that paid $100 to anyone who could toss wrestler Crusher Hogan out of the ring. Wearing a makeshift mask, Peter not only won the cash, but started garnering attention from a TV producer. 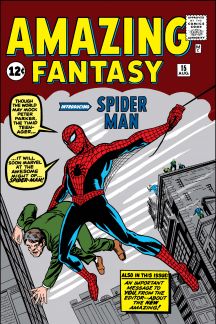 To keep his identity safe—and by extension his aunt and uncle—Parker sewed up his first Spider-Man costume and also invented his iconic webshooters. After appearing on television, Spidey stood in a hallway as a thief ran past, even though a police officer called out for help. “Sorry, pal,” the masked man said. “That’s your job! I’m thru being pushed around—by anyone! From now on I just look out for number one—that means—me!”

On the way home from one of his many performances, Peter found the same police officer standing outside his house with some heartbreaking news: a burglar had killed Uncle Ben! Enraged, the youngster donned his Spider-Man costume and swung his way to the abandoned warehouse where the criminal had holed up. In the process of beating the crook, Peter realized that the man he held in his gloved hands was the same one who ran past him after that first television appearance.

Wracked with guilt, Peter webbed the burglar up and left, understanding not only that he could have prevented all of this, but also that his power came with responsibility. Interestingly enough, those words actually come in the form of a narrative box in this first issue, instead of the sage uncle.

The elements of this story have been expanded upon, translated, transposed, and remixed several times over the years. In the pages of AMAZING SPIDER-MAN #200 by Marv Wolfman, Keith Pollard and Jim Mooney, a powerless Parker realized that the burglar from his origin walked as a free man. In the process of researching Uncle Ben’s death, Peter stopped a different criminal, only to find that the guard who thanked him was also from that fateful encounter all those years ago. Parker returned home to find the killer waiting for him and immediately pounced. After the criminal cold-clocked Peter and took him back to the abandoned warehouse, he revealed that he originally sought a mobster’s treasure hidden in the Parker house, which lead to Ben’s death! Without spoiling too much of this classic story, Spidey eventually freed himself and fought the burglar, even going so far as to reveal his true identity! What kept the bad guy from exploiting that information? You’ll just have to read it to find out!

Stan Lee and Steve Ditko continue the Web Head’s adventures in the pages of AMAZING SPIDER-MAN #1!