The Artifact Thanos Coveted Before the Infinity Stones

You know him. You love him. He’s the reigning big-bad of the Marvel Universe. He's Thanos. But didja know that, once upon a time, his impact had not been fully felt, friend?

Amazing? Incredible? Hard-to-swallow? We’re with you there, whiz-kids, so before you feast your poppin’ peepers on the brand-new THANOS #1 and add more dazzling detail to the early existence of the Mad Titan...

Didja Know… Thanos was kind of scrawny in the beginning?

Our old pal “Judo” Jim Starlin sez he came up with the invincible idea for Thanos while turning the pages of a psychology tome during a college course. Seems Jimmy’s brain filled to near bursting with ideas for a whole Plutarchian pantheon of god-like beings, inspired by the wondrous works of Jack “King” Kirby, natch! And among them? You guessed it: Thanos!

Now, at that point, the big guy was not all that big, and so when Starlin got the chance to provide the peerless plot for IRON MAN #55, Thanos looked lean and mean, but not necessarily bulky and bad. If you dig up all the first marvelous mags including Thanos, you’ll see Starlin sizing him up, and boy did he pack on the pounds!

By the way, ol’ Stone Face—Thanos, not Jim Starlin!—came fully fleshed out with a fearless foe, right from the get-go, name o’ Drax the Destroyer. This kooky character waxed poetic about, well, destroying the Mad Titan, but missed his chance more than once. Snooze ya lose, right, Charlie?

Sure, this one’s really hard to comprehend, True Believers, we get it, but before Thanos got the stones to take on the whole blamed universe, he went after a little thing called…the Cosmic Cube.

Now, we all know the Cube first squared things up in TALES OF SUSPENSE #79 thanks to the undying admiration of the Red Skull, but a few years later Thanos glommed onto its pulsating power and decided he needed it to become a god. And guess what, bunky? He did just that, as written in CAPTAIN MARVEL #28! 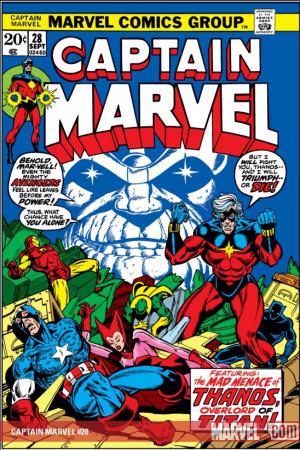 Okay, so we already know this guy’s not exactly the poster boy for mental health, right? To add insult to injury, he also worshipped Death! And yeah, with a capital “D”! Why? Because it looked like a person, pal! Right off the bat, a strange, cloaked and hooded figure could be seen chumming around with Stone Face, and lo and behold, it turned out to be the puzzling personification of death itself. And Thanos was over-the-moon for her. Wait…her? Yep! Read on!

In CAPTAIN MARVEL #31, Thanos takes a moment to make with a mighty monologue—hey, it’s a Marvel mag!—and we learn that to him, Death looks like a lovely lady under her hood! “I truly love you with a passion none may ever match in this star system!” he told her. And then to prove his audacious ardor, he promised to destroy Earth first with the Cosmic Cube. 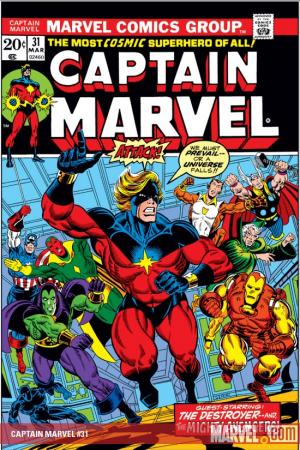 Hoo-hah—no one ever accused Thanos of holding onto all his marbles at once, eh?