The Definitive Dark Phoenix Reading Guide: Part One -- The Beginning

And now that we’re just a few days away from X-Men: Dark Phoenix hitting theaters on June 7, it’s a great time to look back at the comic origins of the Phoenix. But there's sooooo much history and great storytelling behind Jean Grey and the Dark Phoenix that we had to divvy this up into three parts! Today, read Part One of our reading guide -- you can read Part Two here and Part Three here.

In UNCANNY X-MEN #100, Jean telepathically learned how to be an astronaut, knocked out Cyclops, told off Wolverine (which probably turned him on), and started to pilot the spaceship that was carrying everyone, eventually sacrificing her life for everyone else.

In issue #101, they crashed, and Jean was bombarded by cosmic radiation, but miraculously everyone lives. She rose from the water in this full-page scene:

She also got a rad new costume.

Over the next few issues, most of the team was off battling Black Tom and Juggernaut, or Magneto, or Erik the Red, or Firelord. Jean was recuperating at her WILDLY WAY TOO NICE Greenwich Village apartment that she shared with Misty Knight… until aliens came for Professor X.

Jean fully Phoenix’ed up for the first time in UNCANNY X-MEN #105, when she went head-to-head—and wiped the floor—with Firelord, a former Herald of Galactus.

Things got wild and cosmic until Jean SAVED ALL OF REALITY by repairing the M’Krann Crystal with the power of the Phoenix in issue #108. That’s also the first issue with art by John Byrne and Terry Austin. 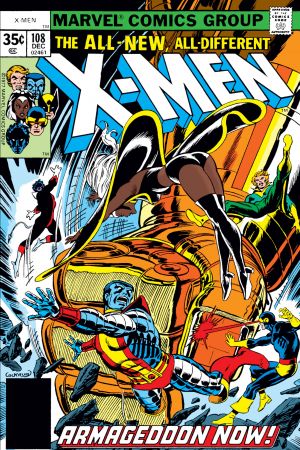 Of course, Jean didn’t go dark right away. The X-Men had adventures and Jean came to grip with her powers over time.

UNCANNY X-MEN #112 – X-Men vs. Magneto. He pretty much trashed the rest of the team, but then Jean let loose and nearly took out Mags on her own. (“Her power is a song within her, filling her with a primal glory, an unhuman joy that she’s beginning to enjoy more and more.”) Unfortunately for Jean, she ran out of juice and Magneto got the upper hand.

The X-Men were seemingly killed after their battle with Magneto, though they were just lost in the Savage Land. Jean and Beast made it back home to Xavier’s but started to move on with their lives.

Jean went on vacation – six weeks in Greece! Jealous. Then she rolled out to Scotland to hang with Moira MacTaggert and crew. All the while, the X-Men were fightin’ and flirtin’ and adventurin’ around the world.

Things took a major turn, though it wasn’t quite clear at the time, in UNCANNY X-MEN #122 when Jean (literally) ran into Jason Wyngarde aka Mastermind on a Scottish street. Also in that issue? Colleen Wing gave Cyclops a key to her apartment, nudge nudge wink wink.

In UNCANNY X-MEN #125, we start to get a sense of how dangerously powerful Jean is – and what Wyngarde’s plans will be. The original Proteus saga twisted and battered the X-Men through issue #128, all while Mastermind kept messing with Jean’s mind and sense of reality. He was really just priming her for what was to come.