Spidey lands in a gang war with The Green Goblin and much more!

Cantankerous publisher J. Jonah Jameson hired a scientist to create a menace to destroy the wall-crawler in AMAZING SPIDER-MAN #20. The result, a new criminal called The Scorpion, proved his mettle against the hero, but ultimately failed in his mission.

Peter Parker’s life intercepted that of the Fantastic Four when he visited the campus of State University and ran into The Thing and The Human Torch in FANTASTIC FOUR #35, and learned of Reed Richards and Sues Storm’s engagement in FANTASTIC FOUR #36. Later, he helped out against a clutch of crooks who tried to wipe out the happy couple’s wedding in FANTASTIC FOUR ANNUAL #3. 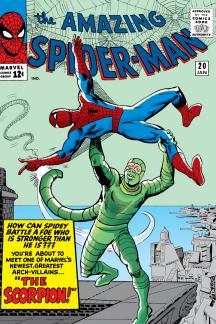 When Jameson offered a $1000 reward for the capture of a burglar known as The Cat in AMAZING SPIDER-MAN #30, Peter swung into action to snag the bounty, still reeling from learning of Betty Brant and Ned Leeds’ engagement. Now an official college student in AMAZING SPIDER-MAN #31, Peter saw his life grow even more complicated by the arrival of The Master Planner to throw a spanner into the works to gum them up.