For over 50 years, Spider-Man has been a sensational standout in the Marvel Universe, and this summer, the web-slinger swings onto the silver screen once more in “Spider-Man: Homecoming”! In celebration of his storied history, we present Spidey’s spectacular step-by-step story! 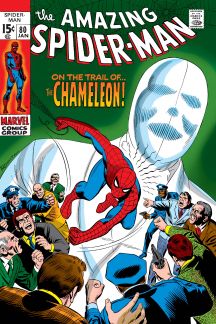 The Wall Crawler started to feel sick in AMAZING SPIDER-MAN #86, just in time for a challenge from Black Widow. Believing his spider-powers fading away, Peter revealed himself as the webbed wonder in AMAZING SPIDER-MAN #87, but after discovering he only suffered from the flu, asked the former Prowler to masquerade as his costumed alter-ego to put his friends off the scent.

A Zodiac force-field kept Spidey from entering Manhattan in AVENGERS #82, but that didn’t stop him from going after an escaped Doctor Octopus in AMAZING SPIDER-MAN #88. Ock seemed to die in a fiery plane crash, but the web-spinner refused to believe his demise and proved the eight-armed maniac still lived in AMAZING SPIDER-MAN #89.

Then, the unthinkable: Gwen’s father Captain Stacy died in the fallout from the pitched battle between Spider-Man and Octopus in AMAZING SPIDER-MAN #90, leaving his daughter to proclaim her hatred for the hero in AMAZING SPIDER-MAN #91 and a candidate for District Attorney to build a campaign around taking Spidey once and for all.