Harry Osborn in peril, extra arms for our hero, and much more!

The X-Men’s Iceman clashed with Spider-Man in AMAZING SPIDER-MAN #92, but after realizing his mistake, joined forces with our hero to put the kibosh on Sam Bullit, a crooked politician wooing Gwen Stacy following the death of her father. Spidey stood alongside Earth’s Mightiest Heroes at a charity event in AVENGERS #85, but when Gwen announced a permanent move to London in AMAZING SPIDER-MAN #93, he tried to drown his sorrows in a rematch with The Prowler.

After a bout with The Beetle in AMAZING SPIDER-MAN #94, and making up his mind to fly to London to bring Gwen back, Peter Parker changed to his alter-ego in AMAZING SPIDER-MAN #95 to put down some British criminals. Back home again in CAPTAIN AMERICA #137, the Web-Slinger held off an attack by The Falcon, then teamed with the high-flying hero and Captain America versus Stone Face in CAPTAIN AMERICA #138. 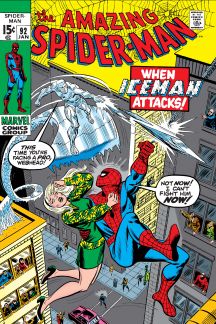 Desiring nothing more than a chance to get away from it all, Peter flew with Gwen and his boss J. Jonah Jameson to the Savage Land in search of a legendary monster in AMAZING SPIDER-MAN #103. When they found the creature, it took the timely intervention of Ka-Zar to unstick them from the web they’d fallen into.