The wondrous wallcrawler joined with the high-flying Falcon to take down the man called Midas in MARVEL TEAM-UP #30, and after a brief battle with Iron Fist in MARVEL TEAM-UP #31, DOPED OUT THE RIDDLE OF Drom the Backwards Man. Then, without missing a beat, he entered into battle alongside the Punisher to wage war against Moses Magnum in GIANT-SIZE SPIDER-MAN #4. MARVEL TEAM-UP #33 brought conflict with the Meteor Man, formerly the Looter, which spilled over into MARVEL TEAM-UP #34. 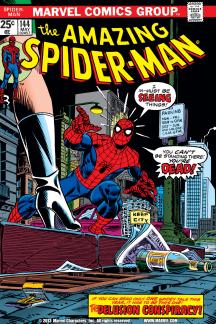 MARVEL TEAM-UP #36 provided a brief respite from the mystery of Gwen Stacy for Peter, despite the strange encounter with the Frankenstein Monster and the Man-Wolf in it and MARVEL TEAM-UP #37. Spidey swung down to the Florida Everglades in GIANT-SIZE SPIDER-MAN #5 to mix it up with both the Man-Thing and the Lizard, but he returned to the Big Apple in AMAZING SPIDER-MAN #147 to learn the truth about Gwen’s appearance and the Jackal’s reason for cloning the dead girl.

Spidey raced to save reporter Ned Leeds from the Jackal’s bomb in AMAZING SPIDER-MAN #148, and discovered his foe to be Peter’s very own college professor, Miles Warren. The professor blamed the wallcrawler for Gwen’s death and unveiled a Spider-Man clone to fight the original in AMAZING SPIDER-MAN #149. After the dust cleared from the brouhaha and the Jackal appeared to perish by his own hand, Gwen’s clone left town to find herself and trouble Peter no more.

Still reeling from the ordeal, the young hero helped the mutant Beast battle the Griffin in MARVEL TEAM-UP #38, and somehow found himself in the middle of a gang war in MARVEL TEAM UP #39 between the Human Torch, the Big Man, the Enforcers, and the Crime Master. It took an intervention by the high-kicky Sons of the Tiger in MARVEL TEAM-UP #40 to sort it all out.

Spider-Man wondered if he might be a clone in AMAZING SPIDER-MAN #150, but when he felt strong emotions for Mary Jane Watson during a fight with Smythe and a new Spider-Slayer, he realized he couldn’t be a soulless duplicate. He later threw his clone’s inert form into a fiery furnace in AMAZING SPIDER-MAN #151, hoping that the strange chapter in his heroic life would be closed forever…