The Origin of Black Panther and Wakanda

Learn the history of Wakanda and how T'Challa became the Black Panther!

Black Panther bounced around the Marvel Universe for a while after his first appearance in FANTASTIC FOUR #52, but eventually joined the world's greatest super group in the pages of AVENGERS #52. He served with distinction on the team for years, but only expanded on his origin story in AVENGERS #87 by Roy Thomas, Frank Giacoia and Sal Buscema.

The 1971 issue takes place right after the team fought the Squadron Supreme on a parallel Earth. Though everyone else seems to feel the thrill of victory, T’Challa suffers from one of the oldest maladies around: homesickness. At the behest of his teammate Quicksilver—who along with his sister Scarlet Witch had never actually been to Wakanda—the Black Panther dives even deeper into his past, taking us along for the ride with him.

T’Challa starts with his childhood as his father, Chieftain T’Chaka explains the mysteries of the Eternal Peak and its Vibranium deposits. The leader reveals that a large part of his responsibilities revolve around keeping this incredibly valuable resource from the outside world.

The outside world, however, consists of people with their own agendas including Ulysses Klaw who wants the Vibranium to power his sound machines. In his mad quest for power he kills T’Chaka resulting in the sworn vengeance of T’Challa. 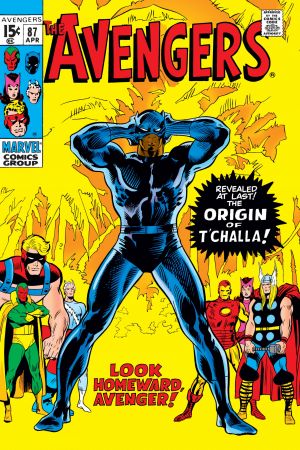 To fulfill that promise, he leaves his homeland to study in Europe and the Americas, eventually returning to face the trials put in place by his own father. Having proven himself, he enters the great statue of the panther and dons the ceremonial suit of the Black Panther before garnering the praise of his people and heading to the jungle to partake in the power-giving, heart-shaped herbs nearby.

But, not everyone supports T’Challa. A betrayer soon reveals himself in the form of a trusted friend who allied himself with none other than A.I.M. The newly minted Black Panther leaps into action, soon defeating the yellow-clad members of Advanced Idea Mechanics, but not before losing a longtime loved one to the battle.

Having recounted this tale to his teammates, T’Challa goes on to admit that the death of Wakanda’s leader in his absence might lead to his return home. Though the issue ends on a cliffhanger in regards to his decision, in the next one—plotted by Harlan Ellison, scripted by Roy Thomas, and drawn by Sal Buscema—Black Panther reveals that he will leave the team to return home, marking the first, but far from the last time he grappled with balancing his duties as a king with protecting the world at large.

After leaving the Avengers, Black Panther next pops up on ASTONISHING TALES #6 and #7. In those issues, by Larry Lieber and George Tuska, Doctor Doom comes to discover the existence of Vibranium and decides to take it for himself. T’Challa moves to prevent this incursion, but the tide of battle ebbs and flows with each man gaining the upper hand at various times. Ultimately, Black Panther convinces Doom that he’s willing to sacrifice not only his own life but his people just to keep the mysterious elements out of his armored hands. With that, Doom retreats, but continues plotting ways to get his own supply of Vibranium!

Celebrate with 184 of your favorite Marvel emojis!

The Scarlet Witch Saves Magic in Her Solo Series