Revisit when the Defenders and original Guardians of the Galaxy saved humanity!

Even for a Sorcerer Supreme, saving all of humanity takes some effort. The whole ordeal becomes even more impressive when it takes place in the future! Along with his teammates Hulk, Valkyrie, and Nighthawk, Strange helped the original Guardians of the Galaxy save the future in the pages of DEFENDERS #26–29 by Steve Gerber and Sal Buscema.

Roy Thomas and Gene Colan actually kicked the story off in the pages of GIANT-SIZE DEFENDERS #5, which initially brought the two groups of heroes together to face the threat of a monster called Eelar. After making introductions, the two groups attempted to figure out how to return the Guardians to their own time. While Martinex worked on repairing their ship, Vance Astro told his younger self a veiled version of future history that explained where each member of the Guardians came from. Not wanting to burden the boy with the knowledge, Doctor Strange wiped all memories of the meeting before returning the young man to his home. 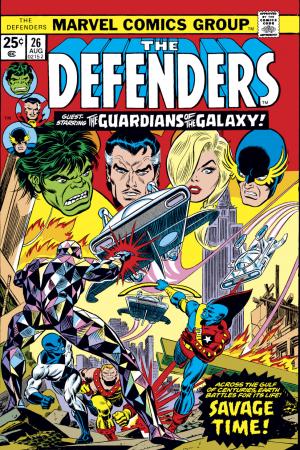 With the ship fixed, Strange used his mastery of the mystic arts to send both squads into the far future to end humanity’s enslavement at the hands of the Badoon. Though various teammates got zapped to different corners of the galaxy facing threats from savage aliens to deadly game shows, Strange linked himself to the ship’s computers, stretched his consciousness out into the cosmos, and brought their people back together.

Aided by an unexpected ally, Strange traveled all over the globe destroying prison sites, freeing all 50 million humans still alive on their home planet. He added that he refrained from simply freeing everyone with the snap of his fingers to ensure that the recently liberated individuals felt some hand in their own freedom.

Ultimately, Strange returned the Defenders to their own time period to allow the Guardians and their new ally Starhawk to continue helping the humans put down the Badoon menace. Strange walked away when asked about why they didn’t stick around to do that themselves.

Renowned writer Steve Gerber took over DEFENDERS with issue #20 in 1975 and wrote through #41 the next year. In addition to making Doctor Strange and company cross paths with the Guardians of the Galaxy, the writer also brought along the likes of Luke Cage, Daredevil, Son of Satan, and Red Guardian to aid our heroes. Gerber and the other DEFENDERS writers and artists went a long way in familiarizing Doctor Strange with the whole playing-well-with-the-costume-crowd thing that he’s become more and more adept at over the years.