Revisit when the Sorcerer Supreme and Doctor Doom faced Mephisto!

In 1989, Roger Stern and Mike Mignola created an epic, standalone tale called DOCTOR STRANGE & DOCTOR DOOM: TRIUMPH AND TORMENT. The graphic novel kicked off with an appearance by old school Strange character The Aged Genghis concerned about Doom—Doctor Doom that is.

Aged Genghis remembered the time that Victor Von Doom came to his cave searching for guidance in the mystic arts. The mage sent him along to a group of remote monks who he soon overtook and used to create his iconic armor, including the mask which he put on his face before it had fully cooled.

Back in the present, Aged Genghis announced a magical competition of sorts to all of the world’s most prominent sorcerers, including Doctors Strange and Doom. The old one channeled Hoggoth, Oshtur, and Agamotto to create a shell around himself that the attendees tried to get through. The winner officially received the title of Sorcerer Supreme.

Strange and Doom remained at the end of the contest with Stephen winning and Doom avoiding the gods’ attacks. Aged Genghis then explained that, as the winner and Sorcerer Supreme, Strange owed runner-up Doom a boon. The despot knew exactly what that would be: help in saving his mother’s soul from the demon Mephisto. 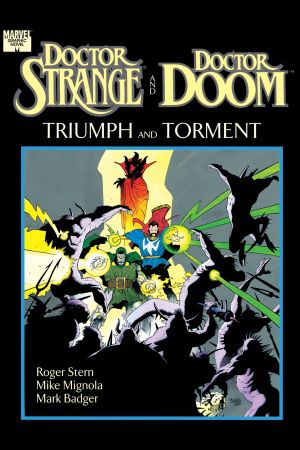 Before venturing to the location of their prize, the two headed to Latveria where Strange saw that the people seemed to love their ruler. He also learned that, many years ago, Cynthia Von Doom made a deal with a devil to help her Gypsy clan gain power in Latveria. She perished before seeing the fruits of her labor, but her son eventually picked up the idea and took power.

After Victor amassed a different kind of power, that of magical training and education with Strange in the role of professor, the duo traveled to Mephisto’s realm. Amidst strange visions that recounted some of Stephen’s own history, potential betrayal, and a mother’s rebuke, the pair still figured out a way to beat the devil at his own game, but not necessarily walk away with a pure victory.

Over the years, Doom continued to study the mystic arts himself, using them to battle the Fantastic Four, Black Panther, and the forces of Hell to the point where Strange worried that the Latverian leader might actually be selected as the next Sorcerer Supreme when he gave up the responsibilities.

The Aged Genghis first appeared way back in 1965’s STRANGE TALES #136. In that story by Stan Lee, Steve Ditko, and Artie Simek, Stephen searched the globe looking for help with an Eternity problem. In turning to Aged Genghis he commented that the ancient mage had been driven mad by his long years of existence. As a counterpoint, Aged Genghis claimed to know everything and provided the Master of the Mystic Arts with a scroll that helped him on his journey. Far from a regular player, Aged Genghis only popped up a few times between this issue and TRIUMPH AND TORMENT, specifically in the second DOCTOR STRANGE volume.