Fourteen years ago today, 'House of M' #7 changed everything.

by Faith D'Isa
"No More Mutants" | Today in Marvel History

In the 2005 event HOUSE OF M, the Avengers and X-Men forged a rare pact in order to manage Wanda Maximoff and the fallout of her recent—and devastating—nervous breakdown. After losing control of her reality-warping abilities, the Scarlet Witch unwittingly killed several heroes, including Vision, Hawkeye, and Ant-Man. And months later, Wanda’s powers became even more erratic—to the point where even Doctor Strange and Professor X had difficulty keeping her in check.

After meeting to determine her fate, the combined team headed to Genosha to speak with her—but the world turned white, and they woke up in an idealistic reality where mutants were the dominant species. Peter Parker was suddenly married to Gwen Stacy, Hawkeye was alive again, Wolverine was the head agent of an elite S.H.I.E.L.D. unit...and somehow the only one who remembered the way the world was just moments before.

Logan began working to find his old teammates, both X-Men and Avengers alike, in a bid to restore their memories and attempt bring back their true reality. And then it happened.

In HOUSE OF M (2005) #7, a team of memory-restored X-Men and Avengers including Emma Frost, Spider-Man, and Ms. Marvel closed in on the mutant utopia of Genosha, in search of Magneto—the one they believed had influenced his daughter into creating this new mutant-led society. But Doctor Strange, speaking to Wanda on the astral plane, discovered that it wasn’t Magneto who had pushed her into changing everything...it was her twin brother, Quicksilver, who believed the X-Men and Avengers were coming to Genosha to kill her.

When Magneto realized what was happening, he turned on his son. In turn, Wanda blamed her father and his obsession with mutant-dominance for ruining the twins lives before they had a chance at normalcy. In anger, Wanda’s powers began to swell again, and she uttered three words.

And the world once again turned white.

The aftermath found the world seemingly back as it once was...until mutants all over the planet started losing their powers; the mutant population dropped from hundreds of thousands to just a fraction of that. Charles Xavier, who'd been missing in the alternate reality, was still nowhere to be found. 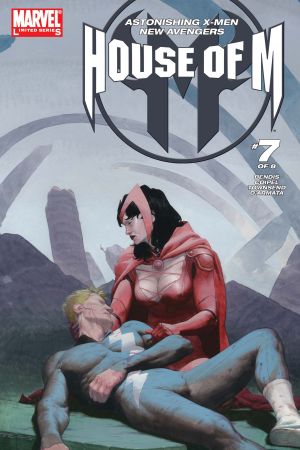 Now, 14 years later, mutantkind is still recovering from those losses and rebuilding their numbers. And the Scarlet Witch—along with her enormously powerful reality-altering abilities—remains excommunicated from the world of the X-Men.

Read HOUSE OF M on Marvel Unlimited now! Then head to Marvel's 80th anniversary hub page for more from the history of the House of Ideas!