Al Ewing reveals the mental status of the Marvel Universe’s most powerful heroes!

As ULTIMATES 2 opens this week, team members may very well be thinking back to a time when things went their way, when they did not find themselves on the proverbial road they currently wander. They will not have a long time to sit with their new perspectives, but we wanted to take a moment to appraise their states of mind after Civil War II shook them all.

So before the wild cosmic adventure and spectacular exploration commands the Ultimates’ full attention, we sat with series writer Al Ewing to find out how the team feels.

Captain Marvel
“She’s coming out of [Civil War II] in a position of massive cultural and political power,” Ewing says. “The most popular hero on the planet, the Alpha Flight program is running smoothly, and even [government liaison Henry Peter] Gyrich is treating her with a measure of respect. But after T’Challa’s public betrayal—which led to the breakup of the Ultimates—she’s finding it very difficult to trust him and, by extension, to trust the team.”

Black Panther
“The Black Panther has his own problems right now, as hopefully you’re reading in his amazing ongoing book and WORLD OF WAKANDA,” the writer points out. “When the Ultimates went outside their remit, he surgically took them down from inside, but he recognizes the need for such a group in a world where threats don’t always come on the human scale. Having shut them down, can he build them back up?” 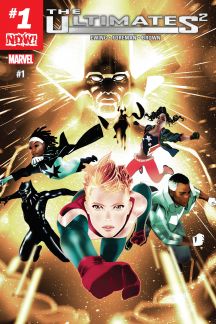 Spectrum
“She’s entered into a relationship with Adam Brashear, the Blue Marvel, and has spent the time since [Civil War II] helping him with his projects,” reveals Ewing. “As a result, she’s learning more about herself and her capabilities. Not everything she’s learning is reassuring. For example: How does she see, if her eyes are themselves made of light? Is she immortal? And what are those strange dreams about?”

Blue Marvel
“He’s relatively happy,” asserts the writer. “In a new relationship, exploring new and exciting science frontiers, a little hero-ing on the side. When Conner Sims comes back, it’s a shock, but he’s willing to roll with. He’s probably the team member who adapts most easily to life on board the worldship Taa II. With his knowledge of the Watcher’s science and tech, it might be a home away from home.”

Miss America
“Coming in, Mac’s been influenced by two big people,” Ewing explains. “One is her girlfriend Lisa, who’s made some good points about Mac learning when she needs help and when to ask for [it]. The other is a literal big person, Galactus, who’s asking Mac to help. So, that’s a lot of motivation for Mac to bring the [team] back and do it right—with help from the Big G’s latest herald, Anti-Man.”

Get in on the ground floor for cosmic adventure with this week’s ULTIMATES 2 #1 by Al Ewing and Travel Foreman, then pick up the next inimitable installment on December 7!