Flash from today's fateful 'Guardians of the Galaxy' #5 to the Goddess of Death's first-ever appearance!

It's difficult to lose someone you love. In the Marvel Universe, some react to such an event with tears and remembrances...while others do everything in their power to bring that lost love back. And you might guess that Hela is one of the latter, especially if you're reading today's GUARDIANS OF THE GALAXY #5! The Asgardian Goddess of Death is struggling to resurrect Thanos, and she is set to do anything necessary for her compatriot in killing...

Though she dedicated herself to the Mad Titan's freedom at one point, the two eventually fell apart—all the more so when Thanos died in INFINITY WARS at the hands of Gamora.

With her continued dedication to a lack of life in the ongoing mag, we're looking back at her earliest appearances. The first of which came in the TALES OF ASGARD back-up story in JOURNEY INTO MYSTERY #102 by Stan Lee and Jack Kirby! Part of the exploration of Thor's past, this 1964 epic found the Odinson seeking out the Fates who told him he would need to meet death before becoming worthy of Mjolnir.

Later, when Balder rushed to Thor and told him the Storm Giants had captured Sif, the God of Thunder rushed off to get her back. King Rugga revealed that Hela, the Goddess of Death, would grant him immortality if he captured Sif for her. 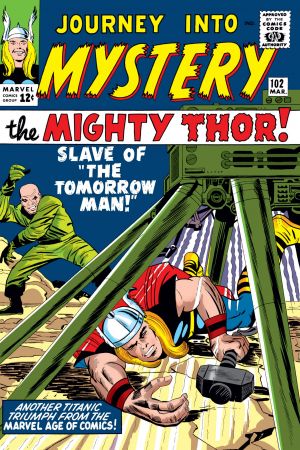 Even upon threat of death at her merest touch, Thor offered himself in place of Sif. The selfless gesture so impressed the Goddess so much that she allowed the pair of Asgardians to leave her presence. This act of potential self-sacrifice also proved his worth and gave him the ability to wield the mighty mystical mallet.

Readers got another taste of Hela in 1966's THOR #133 in a TALES OF ASGARD back-up by "The Man" and "The King". This time around, she left her realm to claim Harokin, leader of the Barbarian hordes that Thor and his people had defeated. Backed by her Valkyrie Guards, Hela bade all those present to avert their eyes and led the man on the Doom Horse away to Valhalla as reward for his dauntless bravery on the battlefield.

Hela did not make her entrance into the modern Marvel Universe until 1968 in the seminal THOR #150. In the previous issue, an Odin-weakened Thor attempted to stop the Wrecker, but ultimately fell in battle. As this one picked up, Hela approached to take the God to his rightful reward, but stopped when his astral form appeared, proving a spark of life still smoldered. 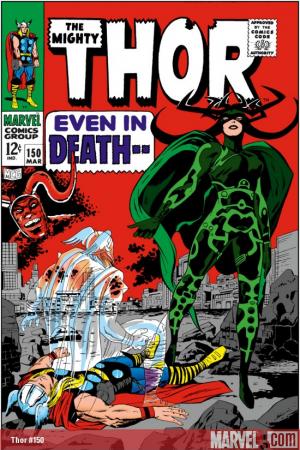 Thor requested more time on Earth which Hela allowed, though he only did so in his ghostly form. And while the spirit wandered, Hela departed. Later, Thor's body grew strong enough for him to return and fight the Destroyer, but Hela returned in issue #154 to inform Thor that she would come back for him when next he became mortally wounded, though she did tempt him with a look at Valhalla that he ultimately refused.

Several years later, Lee and John Buscema crafted an epic in THOR wherein he and his fellow Asgardians had to deal with a possessive force known as Infinity. In issue #186, Hela intended to claim the Odinson with her deathly touch, but he fought back! Still, she sucked much of his strength and youth away before leaving him to die. However, her minion the Silent One sacrificed himself to send thunder back through the god's veins.

Then, in ish #188, it was revealed that Hela had actually created Infinity by stealing a portion of Odin's soul and creating the powerful being. She then loosed the creature on the cosmos in hopes that it would raise the population of her realm exponentially. Though Odin survived, he knew that Hela would come to claim his son's soul, which happened in mags #189-190. 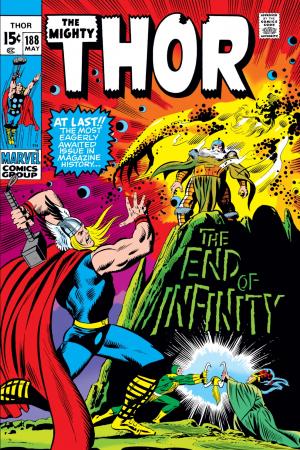 The Death Goddess then traveled to Midgard where Thor hid as Donald Blake. Though initially fooled by a series of visions created by Odin's vizier, Hela began harming innocents which brought Thor out of hiding, even though he knew it could cost him his life. When she threatened to take innocent lives if he continued to evade her, the Odinson gave himself over to her.

Odin, unwilling to watch his son perish, stepped in and killed Hela. Thor, however appreciative, pleaded with his father to undo this action, because he knew it would wreak havoc on all things to have death perish. As his son died, Odin transported Sif to be with her love. She pleaded with Hela to save the love of her life. So convincing and passionate were Sif's words that Hela fully understood the concept of love and brought Thor back!

And thanks to that love, she's trying to resurrect Thanos—much to the chagrin of the Guardians of the Galaxy!

Read GUARDIANS OF THE GALAXY #5 at your local comic shop right now!