The son of Goom tangles with the wrong family in his plot to take over the world!

In a previous Unleash the Beasts entry, Goom came to Earth and made trouble, but he turned out to be basically just a bad egg from his home planet. Well, it turns out he didn’t draw the line at being a megalomaniac, but also a bad parent. As revealed in 1961’s TALES OF SUSPENSE #17, Goom brought his infant son Googam along with him and simply left the child behind upon his defeat!

As psychologist and astronomer Mark—whose communiques to space brought Goom to Earth in the first place—worked on other projects in the weeks following the invasion, his son Billy returned from military school. Bored, the boy decided to explore the nearby caves only to run into none other than Googam. Intent on following in his dad’s footsteps, Googam grabbed Billy and dragged him back to the youth’s house where he broke Mark’s gun and explained that he would remain there until he fully matured so he could then “conquer and enslave mankind.””

To keep Mark, his wife, and Billy on board with the plan, Googam placed a force field around the boy so that his parents couldn’t make off with him. Seemingly helpless, the family bided their time. Meanwhile, a neighbor by the name of Sara realized she hadn’t seen anyone from Mark’s family in a while and went over to check up on them. Googam couldn’t resist scaring her away. 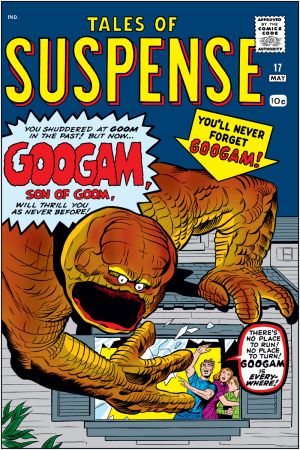 Later, after Googam exhibited the power to shrink them down to doll size, Billy threw a note to the postman who read it only to be scared away by Googam’s appearance.

Sick of the whole thing, Billy challenged Googam to a game of tag. With the alien as “it,”—not to be confused with the Living Colossus of the same name—Billy ran, secretly leading Googam to a nice patch of quicksand that swallowed the vindictive visitor right up!

Like his pops, Googam continues to appear whenever anyone needs a great looking monster, including the pages of MONSTERS UNLEASHED #2!