Considering how much of a pillar he's become of the Marvel Universe, it's wild to think back on Johnny Storm's nascent hero career. Remember, he was just a teen when he snuck onto a ship with Reed, Sue, and Ben that was then doused with Cosmic Rays.

Back in 1962, Johnny became the star of STRANGE TALES, a series that originally launched in 1951 as a sci-fi anthology. FANTASTIC FOUR had just debuted about a year prior, and the Torch proved popular enough to earn his own spin-off! And that's the era that March 25's FANTASTIC FOUR: MARVELS SNAPSHOTS #1 will focus on, as Johnny goes back to Glenville, Long Island for a high school reunion!

At the time, the world knew that Sue Storm was the Invisible Girl, but Johnny's identity still somehow remained a secret. In STRANGE TALES (1951) #101, he landed on the outskirts of Glenville, Long Island and walked back to his folks' house with a jacket covering his FF togs. Once inside, he relaxed in his bedroom, which Mister Fantastic helped make flame-resistant with copious amounts of asbestos.

The next day, Johnny walked with some pals to school past an amusement park under construction and saw a man on an out-of-control rollercoaster—before quickly manipulating a nearby lighter into giving off a plume of smoke to cover his transformation into the Human Torch! Turns out, the mysterious Destroyer was behind this and other attacks on the fun park. Eventually Johnny sussed out that the Destroyer was actually a Communist trying to destroy the high parts of the park that might see incoming Russian submarines! Wow. 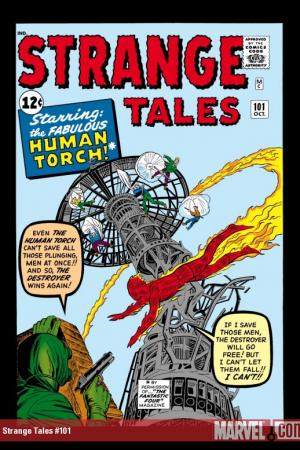 In the following issue, the Wizard made his grand debut. Having seen footage of the Torch taking out the Destroyer, he decided to test himself against the young hero. Already a world-famous genius, the Wizard decided to put himself in danger by using his new atomic powered drill and then purposely causing a cave-in that drew the Human Torch's attention.

Johnny saved the man and took him back to his high-tech house...only to be ambushed. The Wizard locked Storm up and then went out in the world as the Human Torch to rob a bank and spring some crooks from jail. Eventually, Johnny freed himself and bested the Wizard with some help from his sister!

From there, Johnny did his best to juggle his teen high school life with being a Super Hero, which was never easy as Glenville seemed to be a hotbed of odd occurrences. In ish #103, beings from the 5th Dimension used electro-gamma rays to sink newly built houses in an effort to keep humans from discovering the gateway between realities. Then, mag #104 saw Paste-Pot Pete (now known as the Trapster) launching his initial crime spree in Storm's home town before another run-in with the Wizard went down in issue #105. 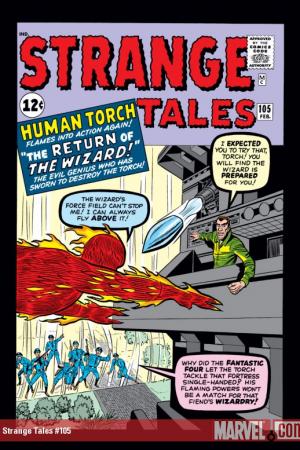 With STRANGE TALES #106, Johnny came to understand that the entire town actually knew he was the Human Torch, but didn't say anything to him because they assumed he didn't want to talk about it! This public knowledge brought Carl Zante to his doorstep; he convinced Storm that the FF took him for granted, which allowed them to form the Torrid Twosome, complete with matching orange and green costumes. Zante, actually a villain known as the Acrobat, tricked the Torch into burning their way into the Glenville Savings Bank vault, but the FF also showed up to stop the crook!

Highlights from that span include Johnny decided to take on Namor all by himself in issue #107 (and with Thing in ish #125), the ongoing relationship with his high school sweetheart Doris Evans, the Acrobat returning in a Captain America costume in mag #114 (which paved the way for the real deal's return in AVENGERS #4), the Torch's first solo team-up with Ice Man in issue #120, the debut of the Beetle in issue #123, and a trip to Camelot to stop Kang in issue #134! 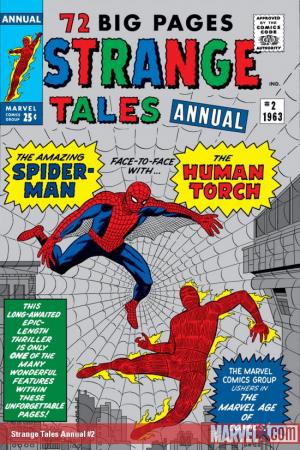 On top of all that, STRANGE TALESE ANNUAL (1962) #2 marked the beginning of Johnny's friendship with Spider-Man!

Pre-order FANTASTIC FOUR: MARVELS SNAPSHOTS #1 today, then pick it up when it arrives at your local comic shop on March 25!