Last week, we saw Carol Danvers come into her own as a Super Hero in the form of Ms. Marvel and even join the Avengers! But, that first stint definitely ended on a strange note when she gave birth to Immortus' son Marcus, vaguely fell in love with him, and then went back to his home dimension of Limbo.

In the landmark AVENGERS ANNUAL #10, Carol made her way back to Earth only to get ambushed by Rogue who used her mutant powers to absorb Ms. Marvel's powers and memories! In the wake of losing herself, Danvers fell from the Golden Gate Bridge. Luckily for her, Spider-Woman was nearby and saved her life.

Danvers soon recuperated with help from Professor X, who saved many of her memories—but not the emotions attached to them. She then had a heartbreaking reunion with the Avengers; upon seeing her old teammates, Carol revealed that Marcus had her under a form of mind control that finally broke when he continued to age at an accelerated rate in Limbo. With him gone, she studied Immortus' machinery enough to free herself.

She felt betrayed by her friends because they didn't show concern for her strange pregnancy or do any investigation into Marcus' claims. However, Carol knew that she could rely on her own strength to get through those trying times.

To recuperate, Carol spent a good deal of time hanging out with Charles Xavier and his merry band of mutants in UNCANNY X-MEN in the early '80s. During this time, Wolverine tried to reminisce with her about missions they ran together back when she was Air Force Intelligence and he served in the Canadian Secret Service (in UNCANNY X-MEN #153), but she couldn't remember! However, you can read one of those exploits in WOLVERINE.

In UNCANNY X-MEN #158, Carol sparred with her new friends the Starjammers and then learned that, when she'd been turned into Ms. Marvel, her physical form had been evolved into that of a peak physical specimen—a trait she still held even with her powers gone. To help her new friends, Danvers infiltrated the Pentagon so they could delete the X-Men from every database. At the same time, she also got rid of the Ms. Marvel and Carol Danvers files.

While on a space adventure with the X-Men in UNCANNY X-MEN #161-#164, the former Ms. Marvel got singled out by the Brood because of her unique physiology, and they experimented on her. The alien parasites got far more than they bargained for with Carol Danvers though, when their tinkering turned Carol into Binary, a being who could tap into the unprecedented power of a White Hole.

Danvers used her Binary abilities to take out all the Brood she could find, but eventually the team returned to Earth. There, Carol had a tense meeting with Rogue, now an X-Man (in UNCANNY X-MEN #171). Feeling betrayed by another group of friends and heroes, Carol took off on her own.

Not long after, Binary joined the Starjammers and began traveling the spaceways with them. Though she did not appear nearly as regularly in that time frame, she did appear in NEW MUTANTS #19, MARVEL FANFARE #24, and UNCANNY X-MEN #200-#201. Along the way she became very close with her teammate Raza, the cyborg pirate.

Binary did play a huge part in the Operation Galactic Storm event in 1992. In this epic, the Avengers wound up in the middle of a war between the Shi'Ar and the Kree. In QUASAR #34, Binary used the majority of her power from the White Hole to save Earth's sun. Afterwards, her new associate dropped her off at Avengers HQ where she recovered.

In AVENGERS #350-#351, Danvers witnessed quite the reunion as the Starjammers dropped in while Professor X and Cyclops also paid the team a visit. When Raza attempted to kill Black Knight, Binary joined members of both squads to track down the Starjammer. 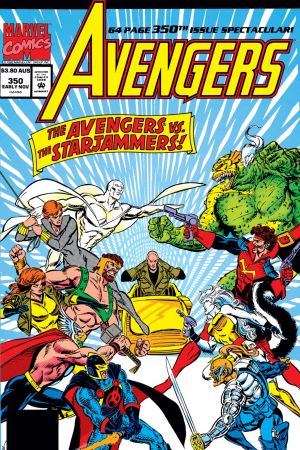 When they tracked him down, Raza admitted only to his longtime friend Carol that he did it in exchange for the safety of his secret son! Danvers went even further by lying to her teammates and telling them that his mind had been tampered with by the Kree, resulting in the attack.

At the end of that adventure, Carol declined a return to both the Starjammers and the Avengers, though she wouldn't be away from the stars or the Super Heroes for long!

Read CAPTAIN MARVEL #1 at your local comic shop now! Get ready for "Marvel Studios' Captain Marvel" on March 8! And stay tuned to Marvel.com for Part 4 of the History of Captain Marvel!