Unsure of where to begin? Discover this Marvel Super Hero and her many aliases with these illuminating comics!

Monica Rambeau has been known by many names since her first appearance when she was bombarded with alien energy that granted her remarkable powers. However, the one thing that has remained consistent with this Marvel Super Hero—why it's her knack as a leader.

We know how daunting it can be to dive into comics. Whether you've stumbled across one of her many monikers or discovered Monica in Marvel Studios' Captain Marvel film or WandaVision series, we want to help deepen your love for the once New Orleans Harbor Patrol officer. Don't know where to start? Don't worry; we've got you!

Start with her first appearance in Amazing Spider-Man Annual #16

In this team-up with Spider-Man, we learn how Monica Rambeau got her powers and became the first woman to take on the title of Captain Marvel.

Monica Joins the Avengers with AVENGERS #227

Captain Marvel joins Earth's Mightiest Heroes after impressing the Avengers with her powers in a series of tests. She quickly became a valuable teammate and would later in the series, Monica would go on to lead the team.

Witness Her Take Out the Trash with CAPTAIN MARVEL #1

In 1994's CAPTAIN MARVEL, Monica takes on a group of racist Super Villains known as the Sons of the Serpent who were terrorizing students with violent attacks at a local university, showing the full spectrum of her powers.

Not only do we see an impressive display of how powerful Monica really is, but it also shows her standing up for social justice and displays her resolve against bigotry.

Then Head Over to ULTIMATES 2

Monica is nothing if not a team player. In fact, you can say she's a two-time protector of the Omniverse with the rest of the Ultimates.

Monica aka Spectrum along with Carol Danvers Captain Marvel, Black Panther, Blue Marvel, and America Chavez are now the newest heralds of Galactus the Lifebringer! 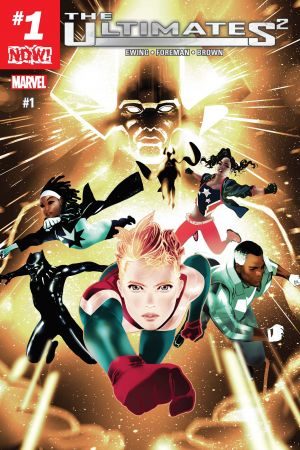 Blade, taking over a new threat secretly taking over the world, recruits a new team of heroes accustomed to darkness—a Strikeforce.

Monica Rambeau, Angela, Spider-Woman, Wiccan, the Winter Soldier, Daimon Hellstrom, and Blade join forces to fight the fights that no other Marvel team can take on.

Meet Spectrum in the Mighty Avengers

And though she's taken on many aliases in the comics, it's in the pages of MIGHTY AVENGERS that Monica adopts the moniker of Spectrum.

Spectrum along with Blade, Luke Cage, the Superior Spider-Man, White Tiger, Power Man and Blue Marvel, all band together to protect the people as the Mighty Avengers. This is another instance displaying just how powerful Monica really is as the Mighty Avengers take on heavy-hitters like Thanos and Shuma-Gorath.

Those should be more than enough to get you familiar with this absolute Queen.