Who Are the Thunderbolts?

Read through the history of the team and all its variations!

After many of Earth’s heroes battled the psionic entity known as Onslaught, they were all seemingly wiped out. Enter the Nazi-raised Helmut Zemo, AKA Baron Zemo, who saw this opening as an opportunity to rule the world. Muahaha! Thus the Thunderbolts were born into existence as one of America’s premier Super Hero teams—one consisting of reformed criminals!

The Thunderbolts roster has seen its fair share of team members and has changed several times over the years. Their latest adventure can be seen in the forthcoming KING IN BLACK: THUNDERBOLTS #1, available for pre-order with your local comic shop today!

But before we get there, let’s take a look back at this redemptive Super Hero group to get an idea of who they are and what’s ahead for the team. History lesson in session!

The original team included leader Helmut Zemo, AKA Baron Zemo, but disguised and using the moniker “Citizen V” to gain the public’s trust. In fact, all the Thunderbolts rebranded themselves with new aliases...and sometimes even facelifts!

First was Techno, the genius criminal inventor Paul Norbert Ebersol, AKA Fixer. Then there was Melissa Gold, AKA Songbird, the cybernetically-enhanced wrestler formerly known as Screaming Mimi. Master mechanic Abner Jenkins, AKA MACH-V, formerly the Beetle (but going by Mach-1 for the purposes of the rebrand). The next recruit was the career criminal and army veteran Goliath or Erik Josten, AKA Atlas. Finally, Zemo recruited the manipulative psychologist Karla Sofen, AKA Moonstone, under the codename Meteorite. 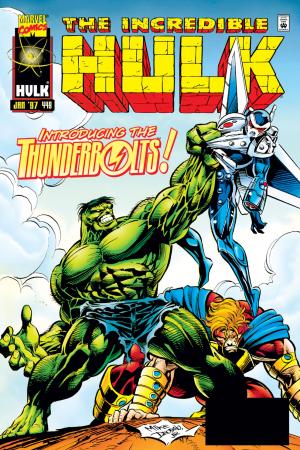 A Jolt of Energy

As the criminals started saving the day, they began to believe their own lie and ultimately became more heroic, especially after Helen “Halie” Takahama, AKA Jolt, joined the team—a bubbly teenager whose bioelectric powers added a positive charge to their roster! (See Jolt officially join the team in THUNDERBOLTS (1997) #4!)

America’s Most Wanted and a Marksman

After the Avengers and the Fantastic Four returned to Earth from their seeming deaths, Zemo revealed his and the team’s identities. As such, they became America’s most wanted and bolted!

While on the run, they gained an ally in former Avenger Clint Barton, AKA Hawkeye, battled Crimson Cowl’s Masters of Evil and Henry Peter Gyrich—a brainwashed CSA agent controlled by Baron Strucker who tried to assassinate the team—and even shared body-swapping misadventures. They eventually received a formal pardon and disbanded in THUNDERBOLTS (1997) #50! 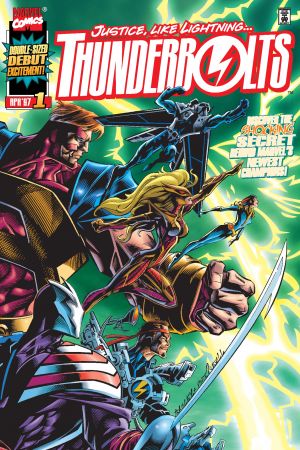 HOW MANY TEAMS ARE THERE? A LOT!

Alongside Songbird and Atlas, Jenkins started the New Thunderbolts, adding Donnie Gill, AKA Blizzard, Genis-Vell, AKA Captain Marvel (now Photon), Janice Yanizeski, AKA Joystick, and Chen Lu, the Radioactive Man. They teamed up against and the Atlantean terrorists, the Fathom Five, and Strucker’s Hydra, and later discovered that Strucker had been secretly financing the Thunderbolts! They also faced the Swordsman and Killgrave, AKA the Purple Man.

See what happens between the T-Bolts and the maniacal Killgrave in NEW THUNDERBOLTS #9-12! 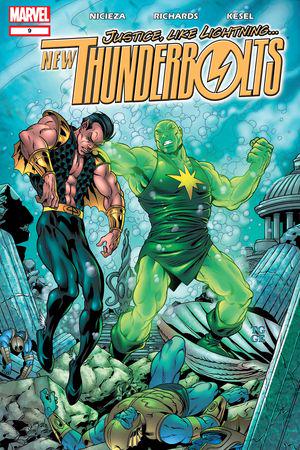 Following the CIVIL WAR event, former Green Goblin Norman Osborn led the next iteration of the Thunderbolts, a team also made up of villains that sought redemption. Their initial purpose was to arrest all those that avoided the newly formed Superhuman Registration Act. Moonstone became the team’s field leader and oversaw Bullseye, Penance, Radioactive Man, Swordsman, Songbird, and Venom. She directed them to perform heroic acts in addition to their policing duties. They eventually lent aid to the Avengers against the Skrull invasion. 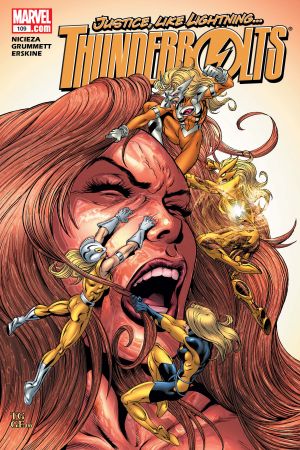 Osborn’s team, however, ended up being less than heroic. They turned on their teammate Songbird after realizing they had differing moral compasses, leading to her ultimate demise despite Swordsman’s attempt to save her. Some of the team joined Osborn’s Dark Avengers, while he created an entirely new Thunderbolts roster to act as assassins for H.A.M.M.E.R., a security agency he led that replaced the inadequately prepared S.H.I.E.L.D. for the Skrull’s invasion. The team included field leader Scourge (Nuke), Eric O’Grady, AKA Ant-Man, Black Widow II, Ghost, Grizzly, Headsman, Mister X, and Paladin.

After Osborn ordered the Thunderbolts to steal Odin’s spear, they were captured by the Mighty Avengers. Following their capture, Luke Cage, with Captain Steve Rogers’ blessing and handlers Fixer, Mach-V, and Songbird, reformed the team with criminals from the Raft. The team included Ghost, Moonstone, Juggernaut, Crossbones, and Man-Thing starting in THUNDERBOLTS (2006) #144! 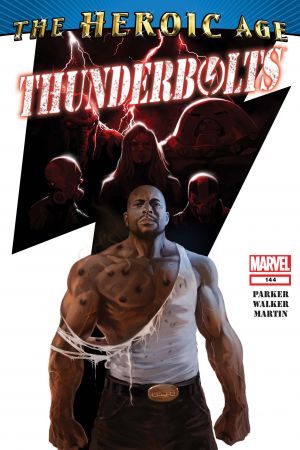 The team faced a tough decision while battling Asgardian Trolls, later faced Terrigen Mist-mutated S.H.I.E.L.D. agents and operatives from the Hand. After Satana Hellstrom joined the team and when magic threatened the Raft, they allied with Doctor Strange. The T-Bolts even travel through time together and helped Captain America and Namor the Sub-Mariner during World War II! See the time-hopping havoc begin in THUNDERBOLTS (2006) #163! 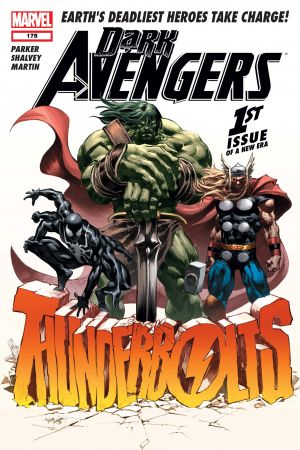 Later, other Thunderbolts teams formed under team leaders such as General “Thunderbolt” Ross, AKA Red Hulk. His iteration was not government-sponsored and acted as more of a covert strike team. The line-up included Flash Thompson, AKA Venom, Elektra, Deadpool, and the Punisher. See them target the most dangerous players in the whole Marvel Universe in THUNDERBOLTS (2012) #1-32.

Bucky Barnes, AKA the Winter Soldier, led the Thunderbolts with a different roster than Red Hulk’s to ensure that S.H.I.E.L.D. never started up the Kobik project again. The project was an attempt to use pieces of the Cosmic Cube to create a near-omnipotent child named Kobik to brainwash Super Villains into becoming Super Heroes. Along with the team’s mission, they tested Kobik’s reality-warping powers. (Check out their adventures facing the Squadron Supreme, alien invaders and the Inhumans in THUNDERBOLTS (2016) #1-12!) 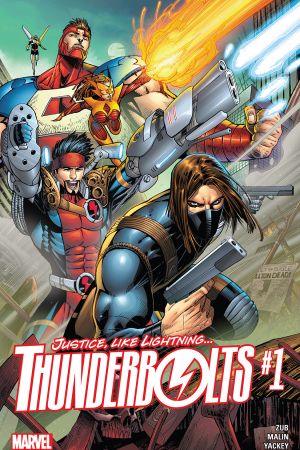 When Baron Zemo returned to the Thunderbolt fold, he led them again in his Citizen V disguise, with T-Bolt veterans Moonstone, Radioactive Man, Fixer, Ghost, and the new addition, Jigsaw by his side. Their goal was to rid New York City of the Punisher.

WHERE ARE THEY NOW?

The latest team to carry the name Thunderbolts will feature an all-new lineup and will be led by the organized crime leader himself, Kingpin! We hear that this iteration will include a team of killers and mercenaries such as the Rhino, Batroc the Leaper, Taskmaster, Mister Fear, and Star. Their first task is to save the city (or die trying) from an army of space dragons in KING IN BLACK: THUNDERBOLTS #1 in shops on January 13!

Read these stories on Marvel Unlimited right now! Marvel Unlimited is your all-access pass to over 28,000 Marvel comics, all available at your fingertips. Sign up now to enjoy your favorite stories sooner, just three months after they’re in stores!

Who is Man-Thing? Read on to learn more about Ted Sallis, whose failed Super Soldier Serum turned him into the swamp-dwelling creature that is the Nexus of All Realities.