Why Thanos Is His Own Worst Enemy

See for yourself by reading "Thanos Wins" on Marvel Unlimited today—for free!

Thanos is not the devil. But when it comes to pure evil, the Mad Titan could really give Mephisto a run for his money.

Take THANOS ANNUAL (2018) #1 for example. Within that issue, Thanos robs a woman of her destiny simply by delaying her bus. On her deathbed, Thanos allows her to see that she could have truly changed the world instead of settling for a mediocre life and a meaningless death. Within the same issue, Thanos destroys the living god of an alien race and eliminates their virtual heaven just to see how they would destroy themselves without their belief system.

By any measure, Thanos’ heart is black. But there’s one being in the universe who hates Thanos more than anyone else. And that’s the Mad Titan himself.

THE INFINITY GAUNTLET (1991) made Thanos an omnipotent being shortly before he used the Infinity Gems to wipe out half of the universe. But he couldn’t hold onto that power because Thanos subconsciously undermined himself out of self-hatred. But in Donny Cates and Geoff Shaw’s "Thanos Wins" storyline, his self-loathing was further explored when Thanos came face-to-face with himself. Literally.

It started in THANOS (2016) #13, in the aftermath of Thanos’ victory over his son, Thane, in the previous issue. Out of sheer boredom, Thanos effortlessly conquered the Chitauri. He could barely muster any enthusiasm for his new army before the Cosmic Ghost Rider arrived on the scene and literally dragged Thanos to the future. Several million years into the future, to be a bit more precise. And there, at the end of the universe, King Thanos sat on his throne awaiting his younger self.

We like to believe that our Marvel heroes will never truly grow old and die, but the ravages of time come for everyone...even Thanos. Though in issue #14, the key difference between King Thanos and the heroes of Earth is that he only grew more powerful while they succumbed to age and weakness before he wiped them out and transformed Earth into a barren planet.

As that dark future unfolds before our eyes, the narration tells us that “The Phoenix burns, Galactus devours, the Watchers witness, the Celestials judge. Thanos lives. Thanos denies. Thanos wins.” Now, he sits atop a throne made out of Galactus’ skull. 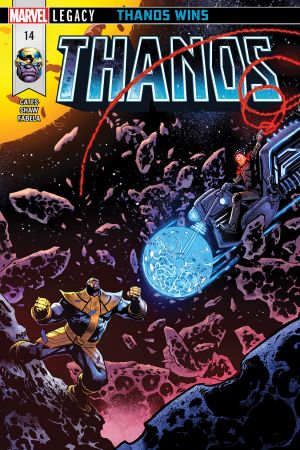 Thanos instantly attacked his future self, and he was offended when King Thanos said “please” and begged for his help. The only thing that saved King Thanos from a prolonged battle was when he uttered Thanos’ intended name: Dione. Before Thanos was born, his mother, Sui-San, had chosen to call her son by that name. But she immediately went insane after his birth, as depicted in the opening pages of this issue. The only word that escaped her lips on the day of his birth was “Thanos.”

Issue #15 reveals why King Thanos had summoned his younger self to the future. He wanted to reunite with the female personification of Death even though the younger Thanos had only recently renounced her. Thanos was also disgusted by the signs of King Thanos’ weakness, and he mocked his fear of “The Fallen One.” Thanos correctly guessed that the Fallen One was a former Herald of Galactus. But he failed to realize that it was a visibly transformed Silver Surfer leading the Annihilation Wave back to Earth. 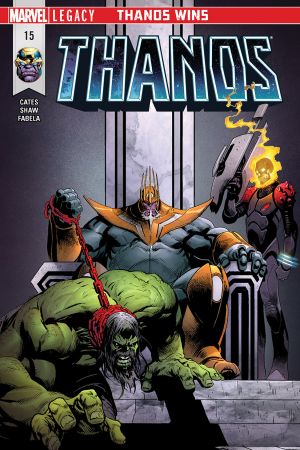 Note that this version of the Surfer resembles his newly darkened appearance from SILVER SURFER BLACK (2019).

The origin of Cosmic Ghost Rider interrupted the battle in issue #16, as readers saw how—spoiler alert—Frank Castle, AKA the Punisher, became a Ghost Rider for Mephisto and later a Herald of Galactus. Along the way, he went quite mad. Cosmic Ghost Rider was so crazy and desperate that he agreed to serve King Thanos simply because there wasn’t much else for him to do. 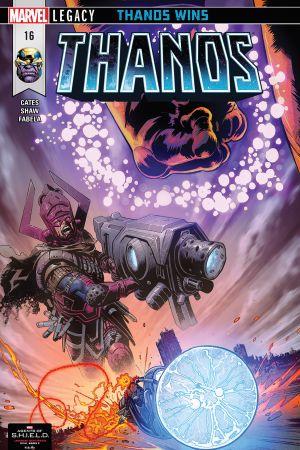 Meanwhile, the battle with the Silver Surfer spilled over into issue #17, as he revealed that Thor’s hammer, Mjolnir, was his secret weapon. But against two incarnations of Thanos, even the Surfer’s greatly enhanced powers were not enough. With the demise of the Silver Surfer, Death finally arrived...dressed for a wedding. 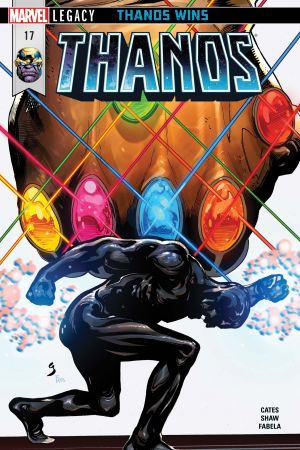 However, Thanos wasn’t there to simply witness his union with Death in unholy matrimony. In issue #18, the two versions of Thanos realized that King Thanos had to die before Death would claim him. However, King Thanos underestimated his younger self. By showing so much vulnerability and emotion, King Thanos had alienated Thanos. He also angered the Mad Titan, and that’s never a good idea. Out of sheer spite, Thanos maimed King Thanos...and left him alive without finishing him off. Then Thanos returned to the past with the stated intention of ensuring that King Thanos’ future would never come to pass. 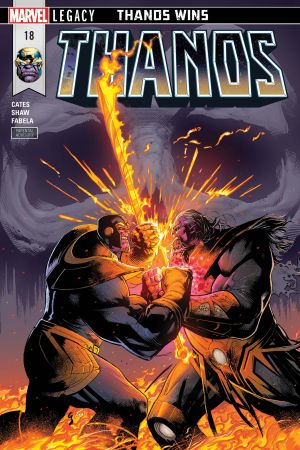 Before our very eyes, King Thanos’ entire existence was erased. For the first time in ages, Death actually spoke when she told King Thanos what his younger self had done: "He won.” Thanos wins, even against himself.

But this time, Thanos was a victim of his own vindictive streak. Death could have claimed Thanos at last, but the Mad Titan decided to keep fighting without giving in or showing any weakness. Because that’s who he is. He wins, but at what cost?