INFINITY GAUNTLET (1991) might be a Marvel Universe landmark, but in the opinion of this contemplative columnist, it's not the most important entry in the chronicles of the Infinity Stones. No, that honor lies squarely on the shoulders of the Jim Starlin-Ron Lim two-issue prestige format limited series THANOS QUEST (1990).

Now, of course, INFINITY GAUNTLET is a must-read, stone-cold classic that shows exactly how much you can do with all six of the Infinity Stones mounted in the Mad Titan's gauntlet, but the previous year, Starlin took a relatively obscure and amorphous set of gems and turned them into the galaxy's most powerful artifacts.

The very first Infinity Stone appeared in 1972's MARVEL PREMIERE #1 wherein the being known only as Him decided to leave his cosmic cocoon to defend the High Evolutionary from an attack. As a reward, the space-based geneticist offered the newly named Adam Warlock a role as the protector of the recently created Counter-Earth. When Adam accepted, he found himself given a mysterious artifact to assist him: a "soul gem." 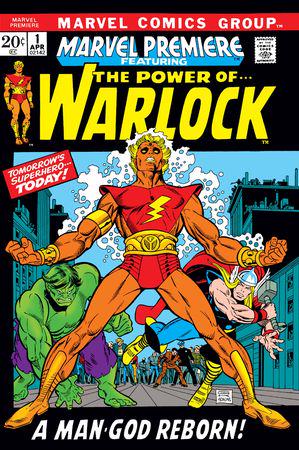 Warlock's stone gave him a wide variety of powers that he used to watch over Counter-Earth and later battle his evil future self, Magus. In CAPTAIN MARVEL (1968) #45, another showed up in outer space—with word getting out that there were actually six in the set. Thanos even collected them all together to try and snuff out all of the stars in AVENGERS ANNUAL (1967) #7 and MARVEL TWO-IN-ONE ANNUAL (1976) #2, though that didn't work because he feared the full power of the assembled objects... A mistake he would not repeat.

The stones came together again when the Cosmic Elders decided to use them to kill Galactus in the early issues of the 1987-launching SILVER SURFER series. At this point, the artifacts were still referred to collectively as the Soul Gems. Even their specific uses had not yet been established... 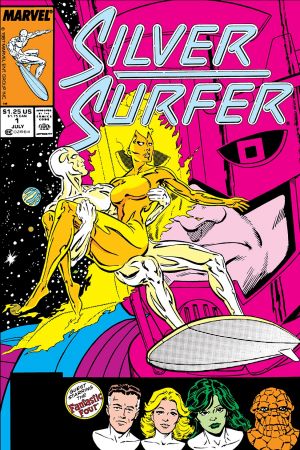 ...But all of that changed with THANOS QUEST!

After being around for nearly 20 years, the Soul Gems truly began to take form thanks to one individual: Thanos. The Mad Titan learned the true nature of the stones when he looked to the Infinity Well in hopes of finding a way to negate half of all life in order to to please Death. In doing so, he learned that the Soul Gems were scattered throughout the cosmos and held far more power than most expected. With that, he set himself on a mission to attain the set.

First off, Thanos flew his flying throne-ship to the Nexus of Reality where Lord Chaos and Master Order had imprisoned the In-Betweener. At some point, he'd acquired the green gem that previously belonged to Adam Warlock. Thanks to his usual brand of intellect, brute force, and trickery, the Titan left the Nexus with the stone and In-Betweener still trapped. 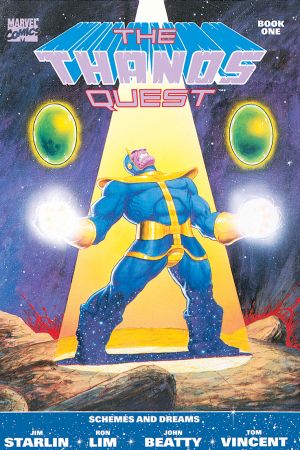 From there he traveled to Tamarata to relieve the Champion of his red stone. After a planet-smashing fight, the Champ traded his gem to Thanos in exchange for a ride to another planet! With the first two in his possession, Thanos noticed that they differed greatly. After rechristening them the Infinity Gems, he named the green one the Soul Stone and labeled the red as the Gem of Power.

Thanos then used both of his gems—which turned green when brought together—to best the Gardener and make off with his orange Time Stone. From there, he aged and then de-aged the Runner to get the purple Space Stone.

Before winning his prize, though, the Titan conveyed a bit of history about the gems. In the previous reality, one being held all power. However, it grew bored and lonely. It saw only one option: death. After killing itself, reality restarted, but the being's core was reborn as the six Infinity Stones.

After the history lesson (and toying with the Runner's personal age), Thanos took the Cosmic Elder and traded him to the Collector for his yellow gem which turned out to control the very fabric of reality! With five of the six, Thanos turned his attention to the Grandmaster and his blue Mind Stone. The elder set up a game that only he could win, but Thanos cheated from the beginning by sending a duplicate in his stead!

With Mind, Soul, Reality, Time, Space, and Power all together, Thanos planned on pleasing Death...but he was stunned when she informed him that she could not be with someone more powerful than her! The sullen master of reality then began laying out his plan of extinguishing half of all living beings from existence with a snap of his fingers as seen in INFINITY GAUNTLET. 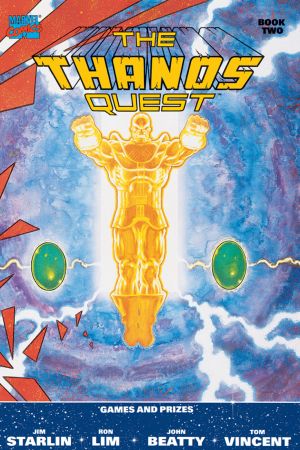 No matter where the Infinity Stones wind up, the wielders will owe much of their knowledge of the item itself to the one person who used them to nearly take over reality...Thanos!

In this article: Infinity Gems, Thanos