Writer Kelly Thompson on Star, the Breakout New Character of 2019

See what the scribe has to say ahead of 'Star' #1, coming to comic shops everywhere on January 8!

Since making her debut in the pages of CAPTAIN MARVEL (2019) #1, Ripley Ryan has become a fan-favorite from Roosevelt Island in New York City to the farthest corners of the mighty Marvel Universe—and now she's getting her own series on January 8 with STAR #1!

Roosevelt Island, of course, was where Star's journey began. After Nuclear Man annexed the place and created a bubble reality within it, he captured journalist Ripley Ryan as part of his devious plan. After Carol Danvers teamed up with Spider-Woman, Hazmat, Echo, and a host of other rebels on the island—including Ripley herself—Nuclear Man was defeated, and the reality collapsed. But Ryan's story was just beginning...

As part of alien agent Minn-Erva's plan to recruit Captain Marvel to her Kree cause, she began experimenting with the creation of human-Kree hybrids. Ripley Ryan underwent the transformation, and soon began siphoning off Carol's abilities, becoming extremely powerful in her own right. Star was born.

After a lengthy tussle with Star, Captain Marvel de-powered her counterpart and sent her to prison in the Raft. There, Ryan united with the Reality Stone. And that's where the new story begins...

To prep for STAR #1 hitting comic shops on January 8, we caught up with character co-creator and series scribe Kelly Thompson to hear more about what to expect from the new book!

Initially, they DID seem to have a ton in common since Star’s powers were literally Carol’s since she was stealing them from her, and since they look quite a bit alike. But the real commonality I think is in how they suffered early on from traumas…and though I might argue Carol’s suffering is far greater, comparing trauma is a fool’s errand. Every experience is different.

Carol and Star are both tricky to write if I’m totally honest. But Carol’s flaws, while they initially felt like a hurdle to the character, eventually became, for me, the best way to humanize her and make her more relatable. And I tried to take the opposite approach with Star, trying to find some of her good qualities—her sense of humor and her sass—teasing those things out to build someone that was more relatable than just “Grrrr. Villain!”

Now that Star is moving into her own book, what’s excited you most about exploring this character in her own right? What have you learned about Ripley since starting her solo book?

Well, it’s incredibly difficult to launch a new character of any kind these days, so I was really surprised by the response we got from readers...although given the incredible design by Carmen Carnero perhaps I shouldn’t have been! I’ve created a bunch of characters over the years at Marvel, but this is the first time there’s been real demand to see them in their own series, it’s so rare!

It’s exciting to get to do a deep dive into a character and really build them into something significant. It’s also terrific to get a chance to dig in on a VILLAIN. So many of our villains get turned into anti-heroes (and we love them for it—#1 Emma Frost fan right here!) but we’re writing Super Hero comics, so we really need good villains! Heroes are only as good as their villains, it’s absolutely fundamental. I think I finally started to really understand Star more deeply as a character when I found her sense of humor. It’s sharp as hell. 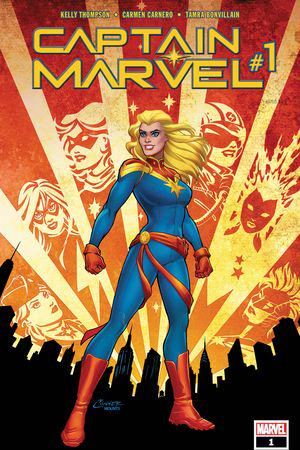 Seems obvious to me that giving a character suffering from PTSD the power to alter reality is a really rich story idea…and also a really bad idea…for everyone. What does that say about the Reality Stone’s motives in bonding with Star? Does it have agency? An agenda? Time will tell!

The other vital element to Star’s breakout success has got to be that costume. It’s so good! Please just take this as a prompt to talk about how awesome it is and why you love it so much.

Her costume is just SO GOOD. Carmen Carnero absolutely killed it on that design. We spent a good amount of time talking about what it should be—a lot of white because Star is pretending to be a hero, red to represent the Reality Stone that we were eventually going to reveal had bonded with her. But my favorite element has got to be that gorgeous asymmetrical short cape—red on the underside, white on top—just stunning. We all went back and forth a lot—and Carmen was very patient—but what we landed on just SINGS. I love it. And like Spider-Gwen before her, it really speaks volumes about how important good character/costume design is in Super Hero comics, doesn’t it?

Scarlet Witch is about to enter Star’s life. What made this fan-favorite the ideal character to put next to Star in this series?

Well, I don’t want to give too much away, but who better to try to steer someone onto a more heroic path than someone with somewhat similar powers who has been to hell and back when it comes to trauma? It’s a terrific and unexpected relationship, and it’s maybe my favorite thing about the series.

Pre-order your copy of STAR #1 at your local comic shop today, then pick it up on January 8!