Writer Marc Guggenheim reveals the roster of the newest Brotherhood!

Before the X-Men can even begin to signal their return to Charles Xavier’s dream, there arises a new Brotherhood of Evil Mutants to derail that plan. As the X-MEN GOLD title opens, these sides create the classic tension of the X-Men franchise.

While much of the Brotherhood’s motives and means remain hidden so as to ensure no spoilers, we did our best to pry some information out of writer Marc Guggenheim.

Marvel.com: To start very generally, one of the long debated issues when it comes to the Brotherhood is whether or not they should be the Brotherhood of Evil Mutants or just the Brotherhood of Mutants. Where do you stand on this long-running debate? What makes sense for them? Any insight into why you think about as you do?

In general, evil people don’t tend to self-define as evil, but by the end of the arc you will understand why they call themselves evil. In fact, there is a very specific reason for it. It is not a random thing. All will be revealed.

Marvel.com: What were your guiding principles, as a writer, in building the team?

Marc Guggenheim: I kind of went through a list of all the various rosters that any group with the word “Brotherhood” in the title had. What I was going for was something that felt like it had a classic feel.

For me, my first exposure to the Brotherhood of Evil Mutants was the “new Brotherhood” that was introduced in “Days of Future Past.” Unfortunately, two of my favorite characters from that lineup—Avalanche and Pyro—are both dead the Marvel Universe.

Those people who have [read issue #1] of X-MEN GOLD have seen the lineup we are playing with…they are probably feeling like, “wait a second, those guys are dead.”

I was talking about it with [editor] Daniel Ketchum; Daniel shares my affection for those particular characters and we were like, “You know, given the story I am telling with this Brotherhood, there’s way to introduce a new Avalanche and a new Pyro that [have] similar powers and somewhat similar looks to them without wrecking continuity.” There was a way to have a cake and eat it too here, so we put them in the roster and are introducing a new Avalanche and Pyro to the Marvel Universe. Because Daniel and I, at least, were both missing those characters or mutants like them.

Marvel.com: What can you reveal about the other members of the team?

Marc Guggenheim: Let’s see. Well, we have Avalanche and Pyro. We’ve got Magma who is a former New Mutant who, as far as anyone is aware, is not an evil mutant so her inclusion in the group is a bit unexpected. I don’t want to spoil much about what she’s doing there, but given what Dan and I were discussing about the origins of this Brotherhood, we thought it would be fun to include someone who everyone knew but did not necessarily know as this bad guy.

I’ve always had a fondness for Magma. I like her look, I like her power set. She struck me as someone who would be fun in that role.

After Magma we have Cleevus. Cleevus is this really strange alien looking character who, hopefully, no one has seen before because he’s a brand new character who is getting his first appearance in X-MEN GOLD. This character is going to prove to be far more important than it looks like at first blush. He’s hiding some mysteries to him.

Actually with Cleevus I’m laying seeds for some stories that we probably won’t get to for another year or at least another six months. Forgot about that double shipping.

I’ve always liked Masque. First of all, when I was growing up, I could never tell if Masque was a man or a woman and I liked how the character was written to be gender ambiguous and drawn that way as well. The power is not a very useful power in terms of battle, but it’s very cool visually and creepy as hell. Masque just struck me as really evil.

Mesmero is, essentially, revealed to be the leader of the team.

Marvel.com: What story opportunities did it open up to put Mesmero in a leadership role, an unusual place for him?

Marc Guggenheim: A couple of things.

First of all, I’ve always seen Mesmero as a…well, not a D-list villain but certainly on the C-list and I’m a fan of seeing villains level up as antagonists. I think Mesmero is ripe for an upgrade or a makeover. I think his look could definitely stand to be improved. I think [X-MEN GOLD artist] Ardian [Syaf] did a great job of executing on a couple of general thoughts I had about how [Mesmero’s] look could be upgraded.

It made sense because this was a character who wasn’t living up to his potential. He could be more of a leader than we’d previously seen. He could be more powerful; he’s got a pretty significant power set if used properly. A lot of what I thought Mesmero was capable of fit in with my larger plans for the Brotherhood. 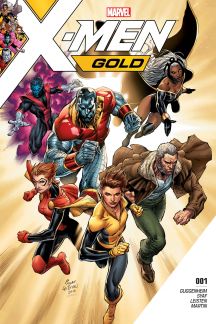 Marvel.com: In what ways will fans see that this is different than any other Mesmero they’ve seen before?

Marc Guggenheim: I think he has clarity of purpose and a certain ruthlessness that they’ve never seen before.

Also, he’s keeping a secret; he’s got a secret agenda that I think makes him more dangerous than you’d expect.

Marvel.com: To move back for a moment, how did you and Ardian come up with Cleevus’s design? How much input did you have, how much was the artist just knowing where the character was going and creating his look?

Marc Guggenheim: One of the thing I love about Ardian is his designs—he’s able to perfectly execute what I see in my head despite not a lot of input on my part. In the case of Cleevus, I basically wrote up a description of what I was going for, of what I was trying to evoke, and I think I described him as having a creepiness to him that was similar to the Brood but obviously he’s not Brood, but I like evoking that similar creepiness.

I think you can see how his design evokes that kind of thing. It’s been awhile since I’ve seen a character in the X-Men who just really really did not look human at all. That’s really what I was asking Ardian for—a character that did not look the least bit human—and I think he delivered.

Marvel.com: Something you’ve said—referencing an idea you’ve been turning over in your head a lot—is in this modern Marvel Universe why do mutants still get singled out? When they are so many kinds of super powered people what is it about mutants in particular that set them aside? You pointed to the Brotherhood as the kind of group that people point to justify their distrust. They are the negative side that people use.

Marvel.com: As you have been digging into the book and these characters, how has that helped you clarify that line of questioning? How has that worked in the writing?

Marc Guggenheim: I try to approach the writing—well, as I said, no one thinks of themselves as evil and every villain is the hero of their own story. Terrorists are convinced they are on their version of the side of right.

It was important for me to take that approach to the Brotherhood of Evil Mutants; to have them approach things from the standpoint—as other incarnations of the Brotherhood have—that whether they like it or not humanity and mutants are in a war with each other. In a war there are causalities. In a war, sometimes you do have to do things that are defined as “evil.”

The Brotherhood has always been the terrorist, the militant faction of mutants. And when you are a minority and members of your group engage in an act of terrorism it seems to exacerbate the prejudices against that minority group. That’s what the X-Men must deal with. It’s just about the activities of the Brotherhood but then the optics of how mutants are perceived because of those actions.

Marvel.com: Speaking of the X-Men, how do they view this emergence of a new Brotherhood?

Marc Guggenheim: I think their reaction varies depending on who we are talking about. One of the things I tried to do was not only get the perspective of the X-Men Gold team specifically—they’re very focused on the practical matter of finding out who [the Brotherhood] is, what do they want, how do you stop them—but the students at the school too.

Their reaction is a bit more visceral; their reaction is focused on “what is this going to mean for mutantkind?” They’re watching the television, they’re seeing all the war drums getting beaten and they’re having a fairly natural fearful reaction.

One of the things I wanted to do with this arc was I wanted the X-Men reacting to the activities of this mutant terrorist group, yes, but I wanted what the mutant terrorists are doing to be not as mutant-centric as we have seen in the past. Their targets and their victims are far more human than mutant.

The X-Men are determined to protect the world that hates and fears them so in my mind that means creating stories, writing stories with humans at the center of them, humans that will suffer or be in jeopardy, as a result of the activities of the bad guys.

Marvel.com: If you could point fans to one member of the Brotherhood they should definitely keep an eye on, who would it be?

Marc Guggenheim: I will say…well, the consequences of this arc and this encounter are probably going to impact Magma the most. It is something she will be feeling the repercussions of even after the end of this first arc.

I would definitely keep your eye on Mesmero though. He’s probably the most intriguing character especially since he’s got some tricks up his sleeves that no one else in the Brotherhood knows about.

You can pick up X-MEN GOLD #1 by Marc Guggenheim and Ardian Syaf available now, and look for issue #2 coming April 19 and issue #3 coming May 3!