The category was "Comics & Graphic Novels" and the clue the Spectacular Spider-Gwen!

It's no surprise that the Marvel Universe gets featured on 'JEOPARDY!' from time to time. Last year, during James Holzhauer's epic run we even saw Marvel themed clues pop up numerous times. But, every time it happens, we can't help but get excited and 'JEOPARDY!' kicked off the new year with an entire category titled "Comics & Graphic Novels" and sure enough, one of the clues was about Marvel Comics!

Here's the clue...did you get it right?

Obviously, the answers is nothing other than the Spectacular Ghost-Spider herself, Gwen Stacy! In an alternate universe, Gwen was bitten by a radioactive spider and gained spider-like powers. Influenced by her father's moral code, Gwen uses her powers to help those in need like her friend, Peter Parker.

You can watch some of Ghost-Spider's adventures in the animated series Marvel Rising and you can read about Gwen and her journey into the Marvel Universe in the pages of her latest comic book: 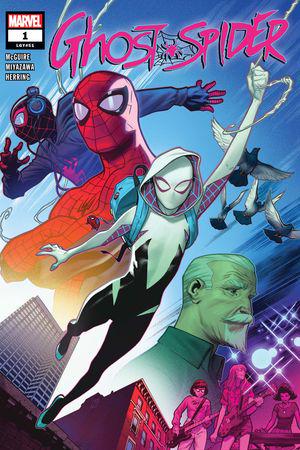 Thanks to the quizmasters at 'JEOPARDY!' for including the Marvel Universe in the competition and we look forward to someone making a Marvel clue a true Daily Double!

In this article: Ghost-Spider (Gwen Stacy)

This March, Ghost-Spider swings back into action in 'Ghost-Spider: Shadow Clones' by Emily Kim and Kei Zama.