Swingin' with the Times: Marvel in the 1960s

See how Marvel Comics changed along with a country in transition!

The 1960s represent one of the most turbulent times in American history as witnessed in both the explosion of pop culture and real-world situations. As Marvel Comics also exploded and grew during the decade, the company reflected that roller coaster ride in its magazines and drew readers in of all ages in doing so.

One of the most engaging aspects of John F. Kennedy’s all-too-short tenure as President of the United States revolved around his continuation and expansion of the America’s space program. In an address to Congress in 1961 he proposed to land a man on the moon by the end of the decade, and pressed home the point in a famous speech the next year. The country began to dream along with him and the “space race” to beat other countries to the punch became an all-consuming ideal.

Marvel editor Stan Lee brought the race front and center in 1961’s FANTASTIC FOUR #1, making Reed Richards a major proponent of it and taking his best friend, his fiancée, and her brother on a rocket trip that would end in tragedy. Two years later, Lee returned to the theme in FANTASTIC FOUR #13 wherein Reed believed he’d discovered a new energy source to power U.S. rockets to the moon, little realizing the Russian criminal the Red Ghost possessed a similar thought.

The editor also made sure to insert an astronaut character, John Jameson, into his and artist Steve Ditko’s AMAZING SPIDER-MAN #1 in 1963, a nod to America’s love affair with real-life flyboys like John Glenn and the rest of the “Mercury Seven.”

As in the 1950s before it, the 1960s brought more technological wonders that impacted not only the greater world of science, but also everyday life. Marvel reflected these advances, too, in the form of its “big brain” scientists like Reed Richards, Hank Pym, and Bruce Banner.

In 1963’s TALES OF SUSPENSE #39, industrialist inventor Tony Stark too the transistors of the 1950s, miniaturized them, and increased their ability to enhance the power of other devices a thousandfold. Writer Stan Lee went on to roll out invention after invention of Stark’s that on the surface seemed like science fiction buts soon became reality. Even villains got in on the game, such as the Living Laser from AVENGERS #34, who in 1966 sprung from the news of the first functioning real-world laser in 1960. 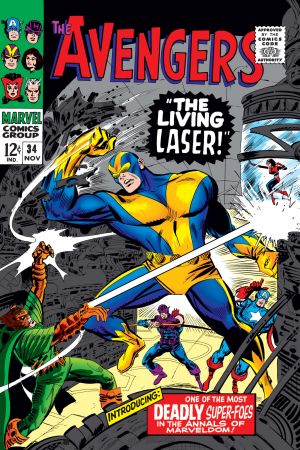 Perhaps one of the most astounding scientific announcements of the decade arrived in 1966 when researchers Nirenberg and Matthaei made news with their successful deciphering of the sixty-four triplet codons of DNA, a project begun five years earlier. Artist Jack Kirby, always one to absorb such advancements for use in stories, teamed with Stan Lee to reveal a group of rogue scientists called the Enclave in FANTASTIC FOUR #66. The Enclave developed an artificial human known as “Him,” and later to be called Adam Warlock, the first such “next step” in Marvel comics beyond real-life experiments.

It’s said that the pop culture of the 1960s could be summed up in three words: Beatles, Bond, and… well, that flying rodent with the cave and the cool car. The entire decade grooved with color and sounds, culminating in such milestones as the miniskirt, the Summer of Love, and the frantic festival known as Woodstock.

Stan Lee knew how important these new sights and sounds were to his readers, and made sure to include them in the ever-growing Marvel Universe. After their splashy American debut in 1964, the Beatles arrived in real style in the pages of 1965’s STRANGE TALES #130 and a riotous run-in with two members of another famous foursome, the Human Torch and the Thing.

The popularity of the James Bond films of the 1960s inspired Lee and Jack Kirby to inject a spy organization styled as S.H.I.E.L.D. into their universe, complete with gadgetry galore, international intrigue, espionage excitement, and a suitable Bond stand-in who answered to the name of Fury, Nick Fury. This all sucked readers in over the pages of STRANGE TALES #135 in 1965. 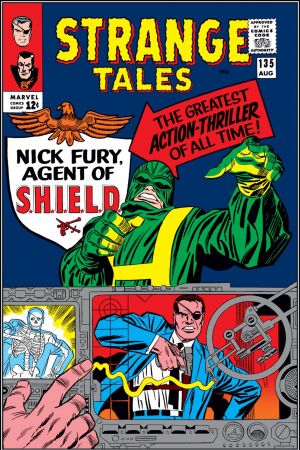 The so-called Cold War of the 1950s between the U.S.S.R. and the United States continued to blow an icy wind through the 1960s, escalating tensions in the world as Russia cracked down on turmoil within its own borders and strengthened the resolve of the Iron Curtain without.

In the comics, Russia proved useful as the springboard for a multitude of menaces for Marvel heroes to battle. The Hulk, Thor, Iron Man, and Captain America all met their match—at least for the span of a story—against Red titans who espoused Communist rhetoric, answered to a certain red-faced Premier, and always lost to the flying fists and natural know-how of America’s true-blue champions.

The very real Vietnam War transformed into a raging concern for the U.S. when in 1965 American soldiers became active participants in hostilities in the Asian country and college campus’ flooded with anti-war demonstrations. Stan Lee wove the far-off country into Iron Man’s origin in TALES OF SUSPENSE #39 to give it a unique grounding and taste of reality. Other heroes also trod the Vietnamese jungles over the course of the war, including Spider-Man and Captain America.

From the get-go, the Marvel Universe featured women in prominent roles, reflecting the missions of such groups as 1966’s National Organization of Women to raise awareness of equality among the sexes and other important goals.

Marvel super teams like the Fantastic Four, the X-Men, and the Avengers could all claim female founding members. Stan Lee and Jack Kirby put special emphasis on their female heroes to include them in adventures as much as the male ones, elevating the Invisible Girl, the Wasp, the Scarlet Witch, Medusa, Crystal, Marvel Girl, and many others to the same level playing field women in real life were achieving in the 1960s. In addition, supporting players such as Mary Jane Watson, Sharon Carter, and Carol Danvers showed their superior strength under pressure – and made sure no one ever saw them as shrinking violets.

Civil Among All Civilians

Without a doubt, one real-world arena Marvel’s characters and stories excelled in during the 1960s concerned the Civil Rights Movement.

As the decade’s advances in the Black community grew exponentially, Stan Lee and successive editors at Marvel were determined to put the comics industry’s old stereotypes behind them for good. In 1963, one year after the first Black student gained admittance to the University of Mississippi, Lee introduced Black soldier Gabe Jones in SGT. FURY AND HIS HOWLING COMMANDOS #1. No mere mascot, Jones was an equal part of the World War II unit, a man Fury and his compatriots relied on, day in and day out. That same year, Lee and Jack Kirby told the cautionary tale of the bigoted, racist Hate Monger in FANTASTIC FOUR #21.

More real life events followed, and perhaps deriving continued inspiration from such milestones as Martin Luther King Jr.’s 1963 “I have a dream” speech, President Johnson’s signing the Civil Rights Act of 1964, and the awe-inspiring Civil Rights March in 1965, Lee and Kirby achieved what no other company had in 1966 by debuting the world’s first Black Super Hero, the Black Panther, in FANTASTIC FOUR #52. Almost immediately popular, the Panther would leap back onstage again and again to cement his leading role in the Marvel Universe.

Introduced in 1967’s AMAZING SPIDER-MAN #51, Joe “Robbie” Robertson took on the important position of City Editor of the Daily Bugle, another example of Lee and company having no qualms whatsoever to show Black men and women in leadership roles in their comics. As always, Lee also showed the other side of the coin with the Sons of the Serpent in AVENGERS #32, a terrifying group of white supremacists who were just begging to be taken down several pegs by Earth’s Mightiest Heroes.

Though Martin Luther King’s shocking assassination in 1968 both saddened and sobered the world, Marvel moved ahead with its yearning for diversity by wrapping up the 1960s with another important character: the Falcon, the very first American Black Super Hero, who took a first flight in 1969’s CAPTAIN AMERICA #117. It would be into the 1970s before other comic publishers would follow suit, making Marvel a leader in mirroring the world around us all and insuring its stories would always ring out with a sense of truth and reality.

The cultural turbulence would last into the 1970s, and Marvel Comics would continue to ride the same waves as its readers while providing its sensational brand of entertainment and escapism. As the decades transitioned, even more characters would arrive while classic heroes and villains took on the characteristics of more familiar real-life faces and events, keeping an audience of adventure-seeking readers in suspense for years to come!