The makers behind the blockbuster hit on what went into designing Spidey's latest foe in the next DLC chapter.

Hammerhead unsuccessfully made a play to become the most powerful crime lord in NYC. Known for smashing the heads of anyone who crosses him, the violently temperamental and often dense Martello must now make amends with Spider-Man and shift allegiances if he hopes to survive the hit placed on him by the other Maggia crime families.

Marvel.com: Of such an extensive rogue’s gallery, why did you want to explore Hammerhead?

Bill Rosemann: While most Spidey fans know that he has a large roster of foes of a traditional “costumed super villain” nature, they might not also realize how many foes he has that draw from the ranks of organized crime. Similarly to Mister Negative, Hammerhead — created by the classic team of Gerry Conway and Ross Andru — provided another opportunity to take a villain from Spider-Man’s comic book rogues gallery that might not be known to a large amount of gamers and show them why he’s so cool. In contrast to Mister Negative, Hammerhead was introduced decades ago, in this case the ‘70s, so he also provided another opportunity to see how we could respect his core elements but also modernize him to appeal to today’s players.

Ryan Smith: Hammerhead is a classic Spider-Man villain, introduced as a rival to Doc Ock, fighting for control of Manhattan’s criminal underground. Hammerhead has a strength and brutality that we knew immediately would lend itself to up-close-and-personal moments in gameplay as well as really impactful storytelling opportunities. This was also a great chance to really focus on Hammerhead and his motivations, putting him front and center as the main villain and showing what makes him a powerful foe for Spider-Man. Reading his appearances over the years, we saw lots of inspirational ideas for making him a unique villain in the game.

Gavin Goulden: As a villain, Hammerhead has so much potential to bring into our world. Planting the seeds in "The Heist" for how hungry Hammerhead is for power, we begin to show a new story for the crime families in NYC which brings a new take to the roster of enemies in our world. Then, the more you learn about Hammerhead by seeing his actions, the more you realize how brutal of an opponent he can be. Besides the classic head butt attack, we also explore more of the reasoning Hammerhead uses to gain his power and take down his opponents – giving much more depth to a character fans have known for years. Naturally, Hammerhead brings you in close for attacks, which leads in perfectly to making his moments more personal – really enforcing the strength he possesses and the damage he can do both physically and emotionally.

Marvel.com: What can you tell us about "Turf Wars story" and how you fleshed it out?

Ryan Smith: "Turf Wars" continues the story we started in "The Heist." This time around, Hammerhead is taking matters into his own hands after Black Cat foiled his plans to take control of the other Maggia dons through their shared financial secrets. Now he’s taking a more direct approach, with his thugs powered by the stolen Sable tech revealed at the end of "The Heist."

The storyline is about how Hammerhead’s vision of a respected and feared Maggia stays true to the old ways, even though he takes some new approaches. We also explore how Hammerhead’s brutality pushes Captain Yuri Watanabe to question whether she should take a new approach to counter the mob boss.

Marvel.com: Did you look to any storylines as inspiration? What makes this iteration stand apart?

Ryan Smith: We looked at lots of Hammerhead storylines to get a sense of what makes Hammerhead tick. "The Warriors" story starting in ULTIMATE SPIDER-MAN #79 gave us a feel for how brutal and powerful Hammerhead could be, and a line from AMAZING SPIDER-MAN #575 showed us how even though Hammerhead always focused on the old-time Maggia, he also saw the need to “evolve or perish.”

This storyline represents a unique opportunity for us to combine classic Hammerhead themes with the world we’ve build for "Marvel’s Spider-Man." Spider-Man and Yuri Watanabe will be pushed to the edge to counter this dangerous Maggia don, and Hammerhead will leverage Sable weaponry to provide a truly unique challenge.

Bill Rosemann: In his comic book appearances, Hammerhead has an obsession with mobsters from the ‘30s (with a wink and a nod to actor James Cagney and the foes of Dick Tracy), which we thought might not be relevant to gamers today. So while we’re staying true to his obsession with the “glory days” of organized crime, we shifted his aesthetic to the ‘70s, with a strong “Godfather” vibe. We also approached his artificially enhanced cranium in a more realistic style, delivering a horrific and frightening take on a character that some view as a punchline. It’s easy to mock something, but we at Marvel Games and Insomniac Games feel the more difficult but proper approach is to see how we can respect the creators’ original intentions and elevate every character.

Marvel.com: How much of a threat is Hammerhead, and how does he challenge Peter?

Gavin Goulden: To me, Hammerhead’s biggest threat to Peter / Spidey is the pure savagery and violence combined with his obsession for power. This mixture of cruelty and ambition is nothing like Pete has seen before in our world and, when faced with the reality of what lengths Hammerhead will go to in order to win. Not being able to reason with the enemy, and watching the actions of that enemy affect the personal lives around him – pulling some into a very dark place – is a challenge unique to only Peter Parker.

Ryan Smith: Hammerhead is a very dangerous foe who only becomes more dangerous as he outfits his crew with Sable technology and will stop at nothing to dominate the other Maggia dons. From the first time you see Hammerhead, you’ll be able to feel just how threatening and dangerous he is. Hammerhead’s brutal approach threatens to upend Spider-Man’s world, leaving him to track down and defeat a dangerous enemy alone.

Bill Rosemann: While some foes can be reasoned with, Hammerhead’s brand of ruthlessness and violence is almost a force of nature. While Doctor Octopus and even Mister Negative had a core humanity that Peter could attempt to connect with, Hammerhead is a roaring locomotive of rage and cruelty who will drag him into darkness that will take every once of the web-slinger’s heroic willpower to rise above. 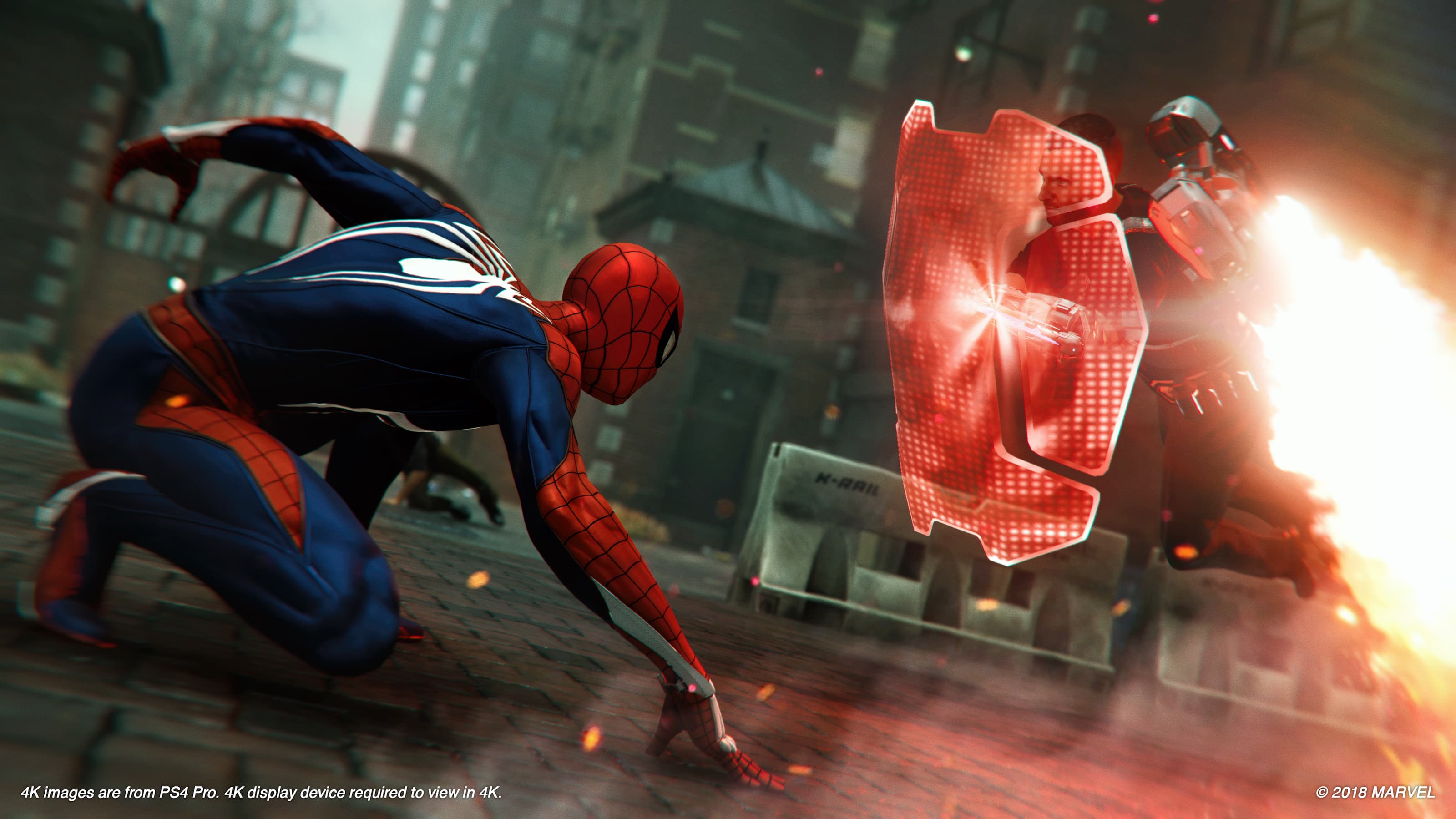 Marvel.com: As for the design, what classic elements did you want to keep, and what areas did you have room to play around and upgrade?

Gavin Goulden: Hammerhead is a great example of giving a nod to the past while looking to innovate on his design. Of course, the character wouldn’t be the same without his trademark weapon – his nearly indestructible cranium. From there, we focused on the idea of Hammerhead being obsessed with the past, but moving the timeline from the 1920’s to the 1970’s. This allowed us to rethink his wardrobe for fashion of the time, as well as decking his thugs out in similar gear. This theme also carries over into the risks he is willing to take, and the choices he makes, to protect his crime family and get the ultimate power he desires.

Marvel.com: What fun mechanics can we expect from Hammerhead in the playthrough?

Ryan Smith: I hate to give too much away before you play it! However, we packed in some pretty cool uses of Sable tech, including a new enemy type and a new way for Hammerhead’s enemies to enter the battle. When it comes to facing down Hammerhead, you can be sure to expect some powerful attacks featuring his reinforced skull. You can also rest assured there will be some surprising and challenging twists in the final battle!

Marvel.com: Lastly, any fun anecdotes about the development of Hammerhead you can share?

Ryan Smith: We visit the Bar with No Name in the "Turf Wars" storyline. The team did a great job with the visual storytelling in this location and I hope everyone enjoys the unique perspective we give you in this space. My favorite part was working with our audio team to find just the right music to play on the jukebox to capture Hammerhead’s more 70’s gangster vibe. Plus, we were able to evolve this location over the course of the "Turf Wars" story, so that made it even more fun to build.

Gavin Goulden: Some fans may notice that we give a nod to a classic comic showing Hammerhead in a similar Adamantium outfit (FANTASTIC FOUR #233). In this story, he outfits himself with an Adamantium suit to battle his opponents, and this served as a great inspiration for how Hammerhead would arm himself in our world, using our technology.

Want more Hammerhead? Insomniac Games’ Ryan Smith, Game Director of Marvel’s Spider-Man, shares some of his favorite stories featuring Hammerhead, with his selections of the best Hammerhead comics below!