This Week in Marvel Games: The Champion, Juggernaut, and Warriors Three Get In On The Action

Heed my words, the Champion enters the Battlerealm this week. 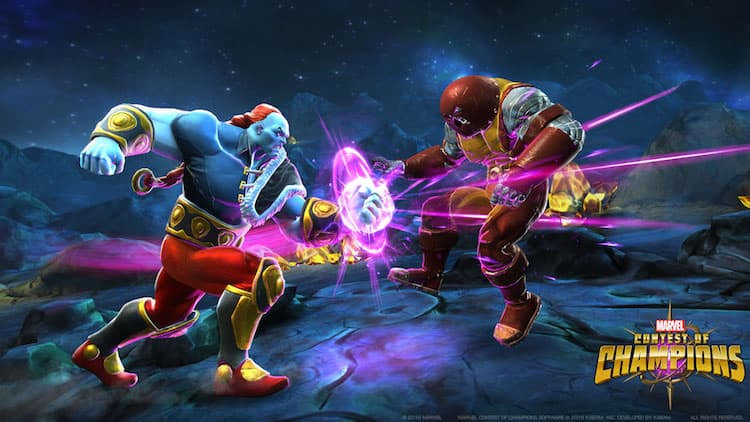 As member of the Elders of the Universe, The Champion is able to control an energy source referred to as the Power Primordial, the residual energy that is left over from the Big Bang itself. He channels this energy to enhance his physical form and he seeks out the greatest fighters in the universe to test the limits of his powers.

Gain synergy bonuses when you pair The Champion with Tough Brawlers like Luke Cage, Persistent Forces like Mephisto and Sentry, Combo Fighters like Thor (Ragnarok) or David and Goliath with Aegon.

The unstoppable force Juggernaut rumbles into MARVEL Strike Force and joins the Brotherhood of Mutants!

The mystical goliath and latest S.T.R.I.K.E. protector, powered by the Crimson Gem of Cyttorak, is nearly invincible and unstoppable. Use his limitless strength to pound and crush the competition into dust!

After failing to claim the throne of Asgard, Hela has turned her gaze to the rest of the nine worlds, starting with Earth. The Asgardian Avengers team up with three warriors to stop the Goddess of Death's war on the Nine Realms!

In case you missed it, watch cosplayer RealTDragon becomes the Advanced Suit Spider-Man from Marvel's Spider-Man!

'Marvel’s Spider-Man Remastered': First Look at the Game on PlayStation 5

How 'X of Swords' Part 2 Raises the Stakes

Those who defy the nation must enter the Mindscape!

New Ways For You to Play At Home with Marvel Games

Reassemble with the Avengers or battle in the Contest of Champions!