Meet the Different Hulks from ‘Hulk and the Agents of S.M.A.S.H.’

Smash into this 52 episode series with Hulk and friends!

Everyone can recognize Hulk —  he’s giant and green, so he’s kinda hard to miss, on top of being one of the most powerful Avengers. However, he is not the only Hulk. From 2013 – 2015, the Hulk was joined by other gamma-fied humans, like She-Hulk and Red Hulk, in Hulk and the Agents of S.M.A.S.H.! Together, they battled any evil that came their way. Although each member has been affected by gamma radiation, they don’t act the same way, nor do they have the same abilities.

With the show now streaming on Disney+, fans can catch up and re-watch the adventures of the Hulks from the very beginning! Let’s tame a dive into all the Agents of S.M.A.S.H.

Hulk: In this iteration, Hulk has maintained his intelligence and is incredibly articulate, signs that he was in more control of this form and retained his Bruce Banner knowledge. He was also serious, calm (for the Hulk!), and had a sense of humor. The Hulk was famously known for his unlimited strength and inhuman leaping, but there were other powers that he possessed. Here, he was resistant to psychic attacks, immune to diseases, and like a phoenix, he couldn’t permanently die. Hulk was voiced by Fred Tatasciore.

She-Hulk: Considered as the most level-headed of the group, She-Hulk was assertive, competitive, confident, and friendly. She had a very similar skill set to the Hulk (as she received a blood transfusion from him, but she once had abilities that were…out of this world). As a Herald of Galactus, She-Hulk owned the power cosmic. It increased her previous abilities to an extreme level, but she could also manipulate cosmic energy, travel through hyperspace, fly beyond light-speed, and have almost-completely physical immunity. She-Hulk was voiced by Eliza Dushku. 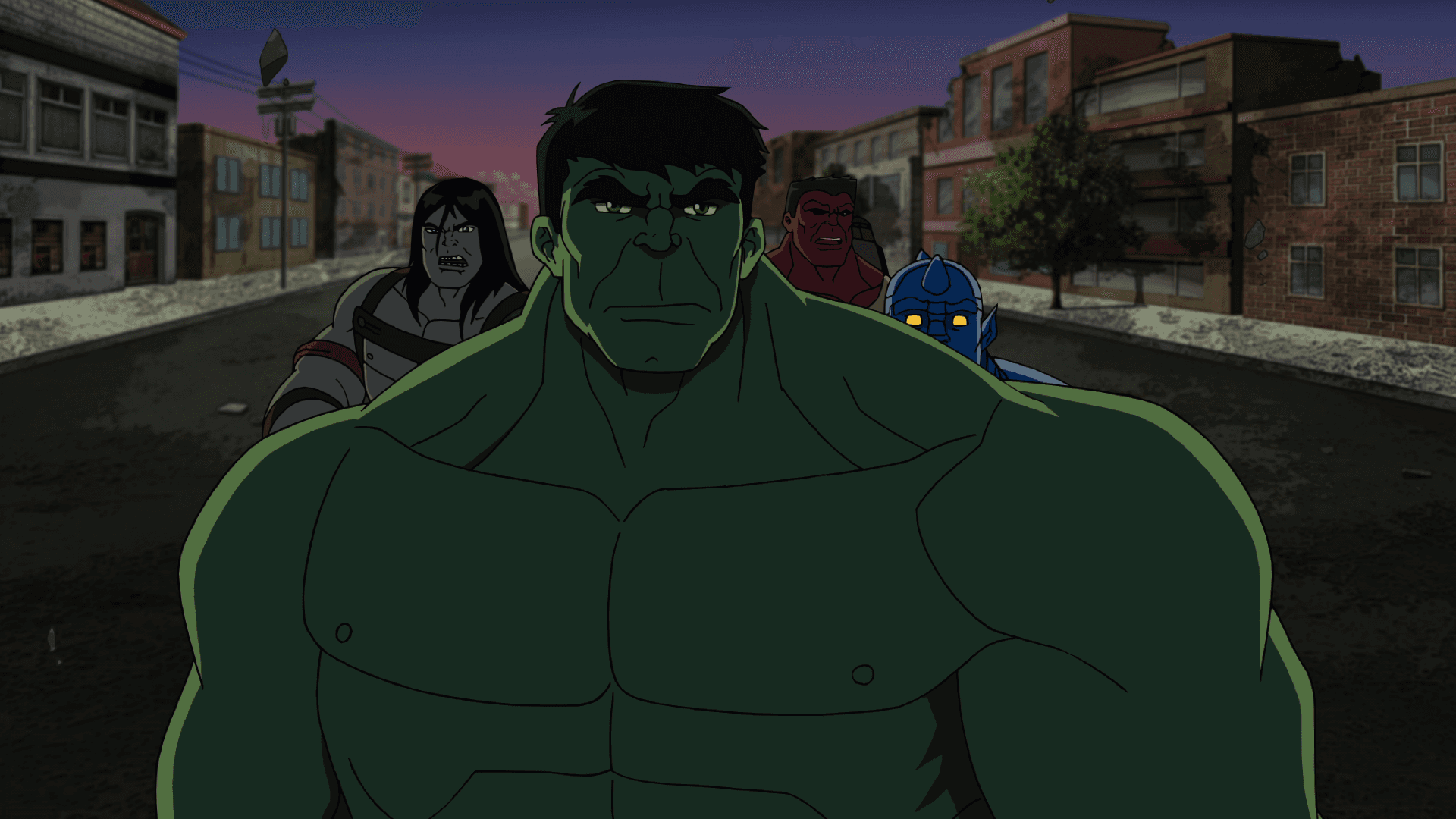 A-Bomb: A-Bomb was seen as the comedic relief of the team, and could be immature, playful, and sarcastic, but could also be enthusiastic and helpful (sometimes during times he shouldn’t). Although not as strong as the other members, A-Bomb made up for this in other ways. He had nearly-impenetrable armored skin, could turn into ball that wrecked everything in sight, and had the ability to camouflage himself. The most impressive talent A-Bomb had in his arsenal was casting spells, which he learned from the Sorcerer Supreme, Doctor Strange! A-Bomb was voiced by Seth Green.

Red Hulk: This militaristic Hulk was the epitome of arrogance. Red Hulk was boastful, hotheaded, and egotistical, or in short, in Hulk’s words, “a jerk.” In addition to the standard Hulk-like abilities, Red Hulk had instantaneous cellular regeneration, which basically made him immortal. He also possessed gamma radiation emission — the angrier he became, the more radiation he emitted from his body. Although it gave Red Hulk the appearance of being on fire, he can overheat and explode, which is not fun for anyone in the surrounding area. Red Hulk was voiced by Clancy Brown.

Skaar: Skaar was impulsive, angry, and wild. His behavior was so outrageous at one point that his teammates compared him to an excited dog. Skaar’s ability to master a variety of weapons made him stand out from the other Hulks. He used an energy whip and a “kaboomerang” (a boomerang that blows up), but his preferred weapon of choice was his broadsword. Skaar really loves swords. Skaar was voiced by Benjamin Diskin.

This calls for a normal amount of rage.

Tatiana Maslany, Mark Ruffalo, and the rest of the stars and creative team behind Marvel Studios' She-Hulk: Attorney at Law discuss the incredible series now streaming on Disney+