As 'Old Man Quill' #4 hits shelves, set forth with a fantastic file of fiendish frays!

It's been terrorizing the Marvel Universe for almost six decades. Its limbs can shatter mountains. Its back scrapes the sun.

Or so the story goes.

Yes, it’s time to turn discussion to Fin Fang Foom, an alien dragon with an origin so murky one can barely extricate the truth of its origins out of the sludge. Originally created by Jack Kirby and Stan Lee, the monster made its debut in the pages of STRANGE TALES #89. And today, the beast returns in OLD MAN QUILL #4, where it fights Peter and the Guardians of the Galaxy in the Grandmaster’s battle arena. Will they win or will Foom squash them like bugs?

As you gear yourself up for the action, revisit five of the most incredible battles Fin Fang Foom has ever seen!

Ol’ Fin’s first-ever appearance in the Marvel Universe pitted him not against an iconic Super Hero, but against a regular man: Chan Liuchow. Chan was foolish enough to awaken the dragon with a special herb after the creature had been asleep for centuries.

Chan then led the dragon on a merry chase, hoping that it would help defeat a Communist invasion force from Red China on his home island of Formosa. The plan worked and Chan put Fin Fang From back to sleep with yet another herb. In this case, brains won over brawn.

What happens when one destroyer meets another? When Fin Fang Foom kidnapped some kids and attempted to fertilize a clutch of eggs ready to birth the last of his series, Drax, Galactus, and Terrax fought back. 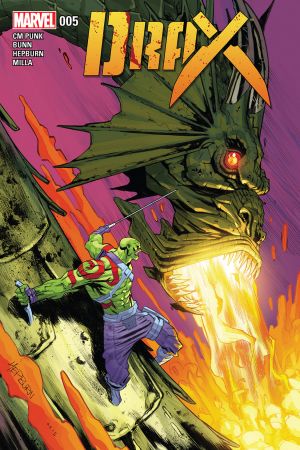 Fin considered Drax to be a mere insect, but you know Drax never gives up an opportunity to sink his twin blades into the hide of an ugly alien monster. During a trip through a portal, however, Fin’s eggs were reduced to ash, driving him into a deep depression when he realized that he’d be the last of his kind. As such, he asked Drax to kill him.

Fin Fang Foom doesn’t usually fight for the good guys, but sometimes he can be persuaded to by a young, kaiju-controlling kid named Kei Kawade (A.K.A. “Kid Kaiju”). 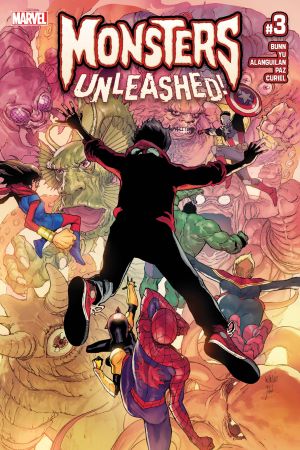 When Leviathans tried to take over the planet in the MONSTERS UNLEASHED series, Fin and a horde of other beasts actually fought to save the Earth. In fact, this threw the Avengers for a loop as Foom declared the following through a mouthful of fire: “Offer these upstarts no quarter! We’ve been trying to conquer this pitiful little world since long before they arrived! But today…we fight in defense of Earth!” Backhanded comment about our world aside, Fin Fang Foom can be a pretty cool dude when fighting against other monsters.

NOT ALL FIGHTS ARE PHYSICAL

There was also a time when the great Fin Fang Foom was shrunken down and forced to become a mainstream member of society instead of trying to knock it down. 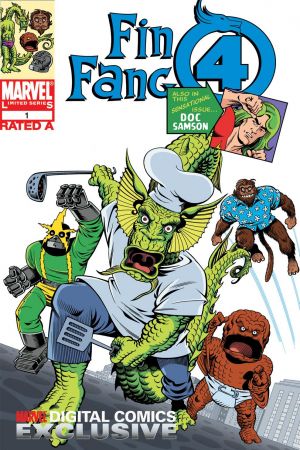 Googam, Elektro, and Gorgilla were also part of this cabal of once-great monsters, and to get a better idea of their psychological well-being, Reed Richards (A.K.A. Mister Fantastic) hired Dr. Leonard Samson to help with the parole process of each beastie. Fin Fang Foom showed up late to the assessment with his lawyer in tow to inform Samson that he must cease at once as the methods for evaluating the human mind don’t apply to monsters. When Googam protested, Foom asserted that the laws of humankind were so full of loopholes, that they would be the best way of taking over the world.

In a one-page comic from 2010’s AGE OF HEROES #3, readers learned that Doreen Green (A.K.A. the Unbeatable Squirrel Girl) single-handedly defeated Fin Fang Foom with the help of Tippy-Toe, while the rest of the Great Lakes Avengers sat around playing cards. 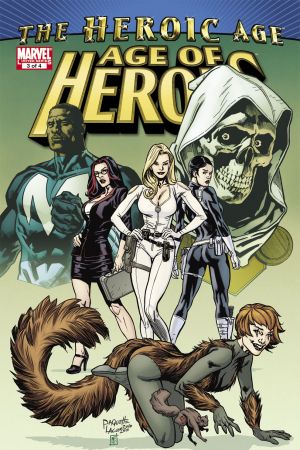 While we didn't actually get to see the fight, Doreen described it as “touch n’ go for a while.” Realizing that she’d been holding her teammates back, Squirrel Girl announced that she was striking out on her own and that her first act after defeating Foom was to go to Disneyland.

OLD MAN QUILL #4 is on sale at your local comic shop now!

Hear from the series' writer Daniel Warren Johnson about telling the story of one of his favorite Marvel characters!

Has Shang-Chi Met His Match With Sister Hammer?

Look inside 'Shang-Chi' #2 before its October 28 release!