8 Characters to Watch in 'War of the Realms'

Get caught up with this quick-hit list of where we stand in the massive event!

The other nine realms have been lost to war, and now it’s Midgard’s turn.

WAR OF THE REALMS is upon us, and Malekith the Accursed has brought his army of dark elves, frost giants, angels, trolls, fire demons, and more to wreak havoc across the world. Only the heroes of Earth can turn the tide of this conflict, but it’s going to take more than just the Avengers. And in next week's WAR OF THE REALMS #3, some unexpected players will have to step up their game in an attempt to save the planet from ruin... 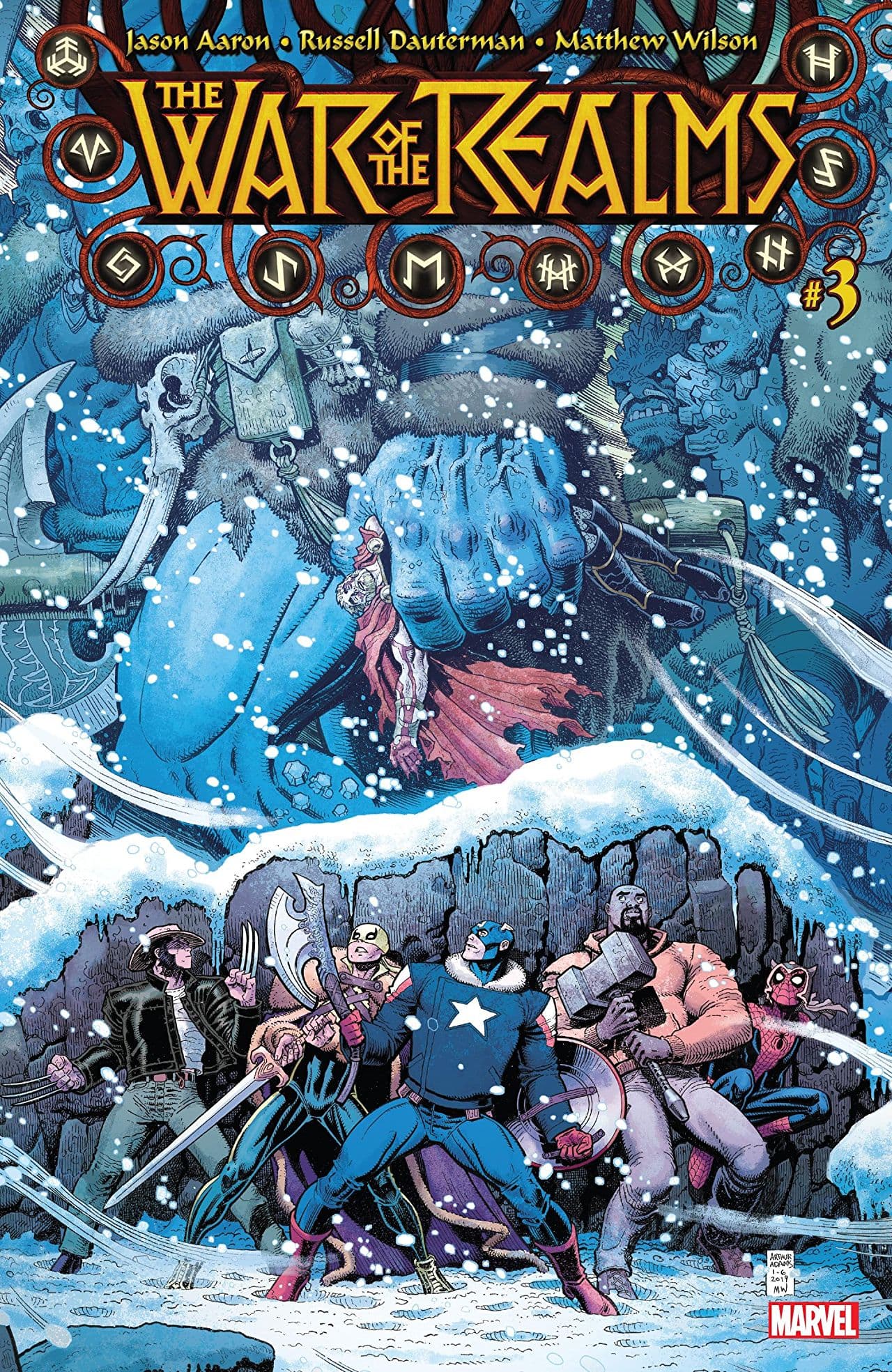 As part of our ongoing coverage, Marvel.com is running down some of the key players in WAR OF THE REALMS and where things stand as of now. 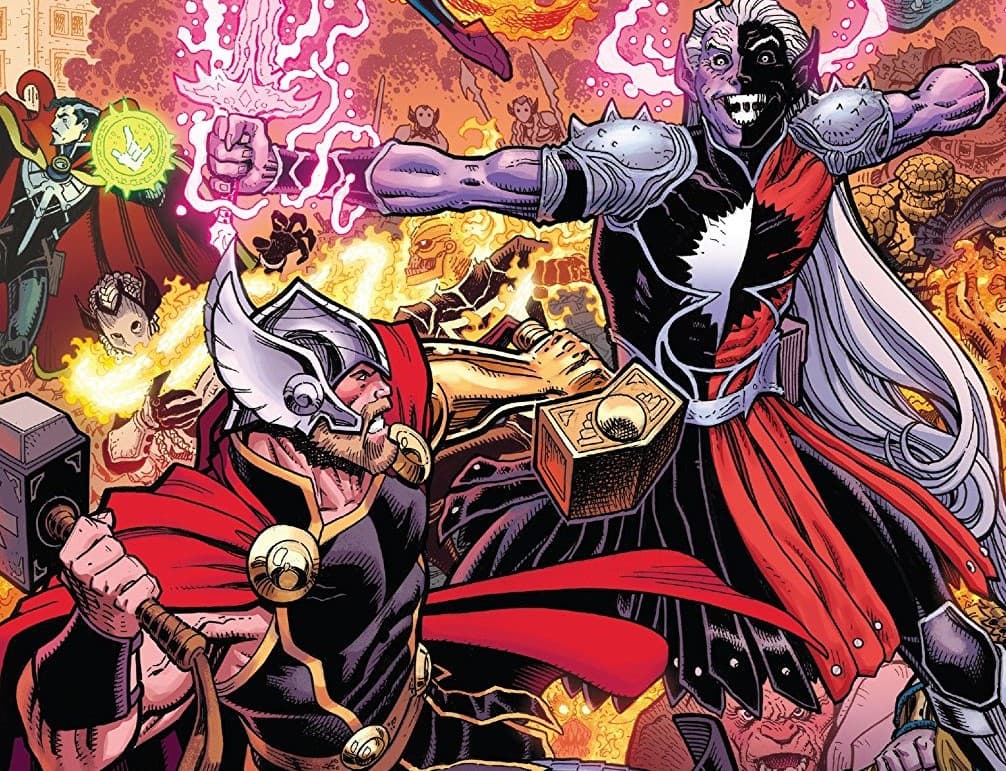 Ordinarily, this whole event would beright in Thor’s wheelhouse. But the God of Thunder has been taken off the board by Malekith, and trapped in Jötunheim during WAR OF THE REALMS #1. Naturally, the Son of Odin isn’t going to go down without a fight. But without the Bifrost, Thor doesn’t have any way to escape on his own...

Fortunately for Thor, his mother, Freyja, is already planning a rescue party.

Malekith’s assassins tried to silence the All-father within his own throne room, and they very nearly succeeded in WAR OF THE REAMS #1. Odin returned to lead the Valkyries into battle in WAR OF THE REALMS #2, and he’s proven to be resilient. However, not even the All-Father can simply shake off his nearly mortal wounds.

Now, Odin has been forced to rest and hopefully heal. But by the time he's restored, it may be too late for Earth...

In some ways, this is all Loki’s fault. And he paid for it with his life in WAR OF THE REALMS #1. Loki joined Malekith in the hopes of bringing him down from the inside. Unfortunately, Malekith betrayed him first.

Loki’s estranged father, King Laufey of the Frost Giants, threatened his adoptive mother, Freyja. Loki saved her life, only to be viciously eaten by his own father. But the real fate of Loki was revealed in THOR #12. Loki lives on within his father’s stomach, although he has been dismembered and he welcomes death. Loki has also been forced to face the fact that he created Malekith centuries ago, and the War of the Realms can be traced directly back to him. 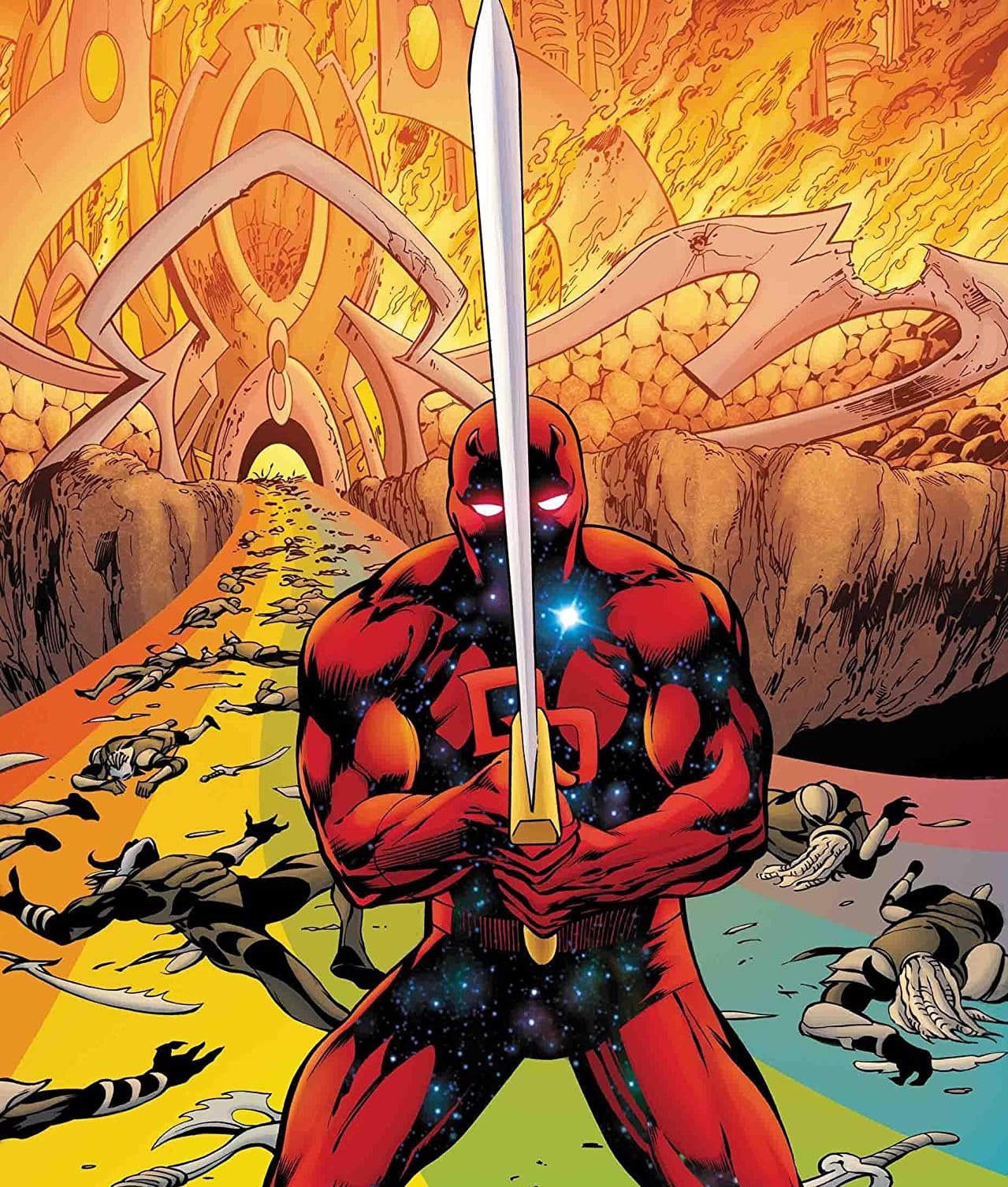 WAR OF THE REALMS: WAR SCROLLS #1 gave us a glimpse of the near future. Matt Murdock’s alter-ego is no longer just the defender of Hell’s Kitchen. Daredevil has taken up Heimdall’s sword and become the God without fear. Strangely enough, Daredevil’s first task may be to save the Kingpin, Wilson Fisk, from Malekith’s forces.

How did Daredevil get Heimdall’s sword and sight? WAR OF THE REALMS #3 looks like it might have those answers... 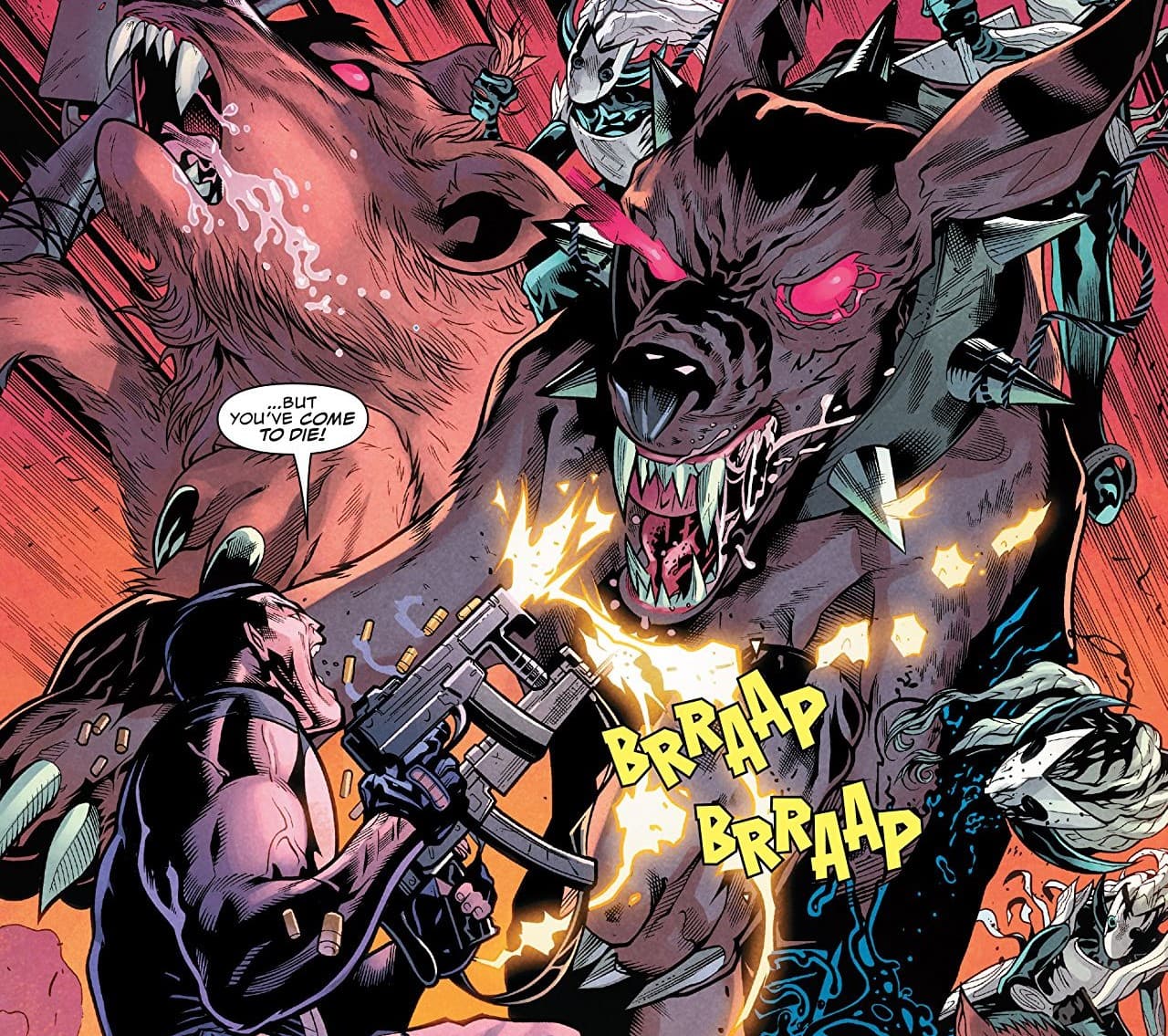 Frank Castle was built for war. That’s why the Punisher thrives in situations like this. While Castle was on the frontlines in WAR OF THE REALMS #2, the WAR OF THE REALMS: PUNISHER #1 revealed that he’s played a direct role in saving innocents and civilians.

In a way, Castle has also violated his code of killing criminals by recruiting a bus full of violent felons to help him protect hospital patients who are being evacuated to New Jersey. Whether Castle can trust his makeshift “team” remains to be seen.

Balder has been dead and trapped in Hel for a while, so it’s understandable that he missed a few things while he was indisposed. He was recently introduced to his new half-sister, Laussa Odinsdottir, the infant daughter of Odin and Freyja. Balder was so overcome with love for his new sister that he vowed to protect her.

WAR OF THE REALMS: JOURNEY INTO MYSTERY #1 forced Balder to live up to his vow, while also assembling his own team to keep Laussa safe. So far, Balder has recruited Hawkeye (Kate Bishop), Spider-Man (Miles Morales), Death Locket, Druid, and Wonder Man. Laussa may be the key to ending the War of the Realms, which means Balder and his allies are going to have their hands full. 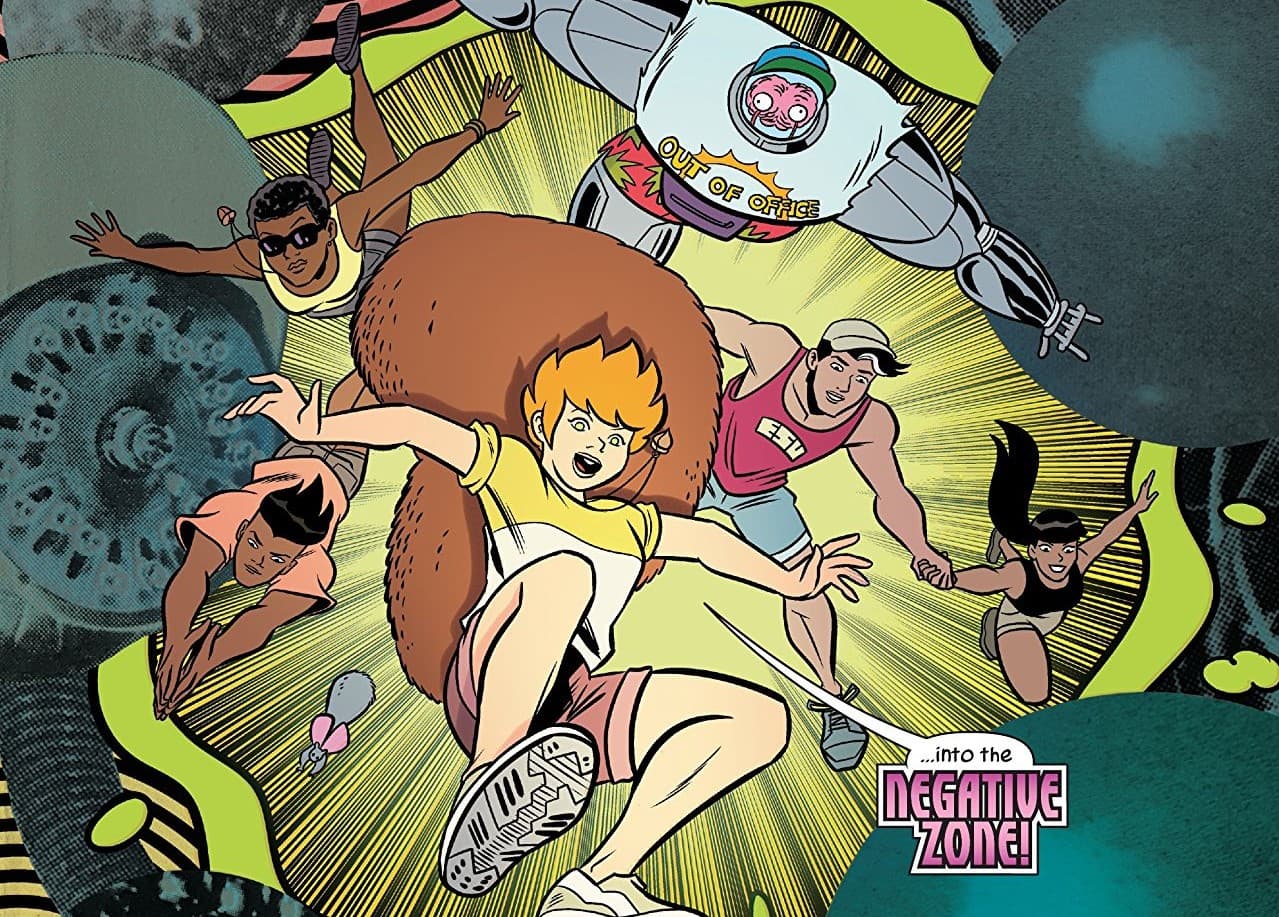 Doreen Green is another unlikely champion in the War of the Realms. But UNBEATABLE SQUIRREL GIRL #43 brought Doreen face-to-face with Loki before he was swallowed by his father. Loki reaffirmed his friendship with Doreen and sent her on a secret mission to Canada to save North America from the Frost Giants.

Along the way, Doreen received an assist by Oak Tree Ultron. But even the Unbeatable Squirrel Girl is out of her depth in this conflict. To make matters worse, Doreen was confronted by Ratatoskr, the Asgardian god of gossip! 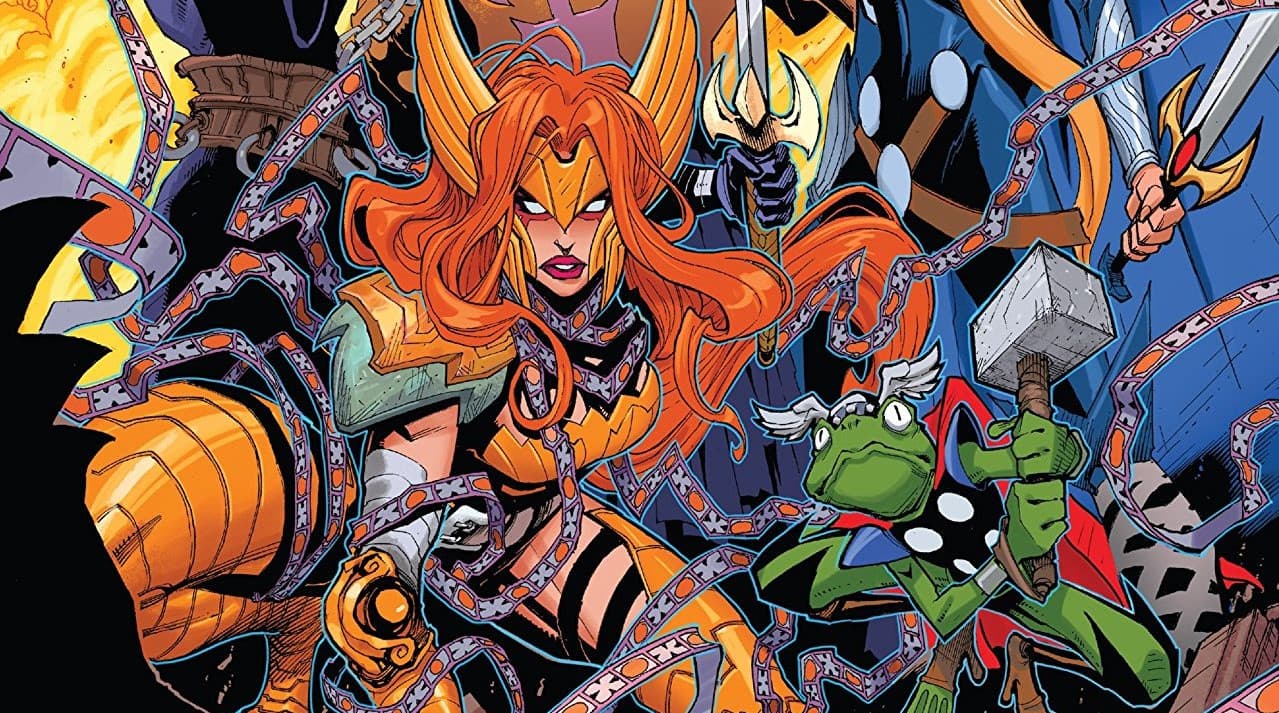 Brunnhilde/Valkyrie and her team were plunged into this conflict in ASGARDIANS OF THE GALAXY #8. Several members of the group, including Thunderstrike, Throg, and Annabelle Riggs are from Earth, therefore they have personal stakes. Annabelle even usurped control over Valkyrie’s body to save her girlfriend.

But in WAR OF THE REALMS #2, the Valkyrie were slaughtered in battle with Malekith, and even Brunnhilde was on the verge of suffering a fatal blow. But if Brunnhilde dies, what will happen to Annabelle? Their spirits and bodies have been linked for years. And the end for one could be the end for both of them...

Top 10 ‘War of the Realms’ Moments

Ten Realms of the Marvel Universe. 10 Reasons to read the most epic Thor event ever.

New in Marvel Unlimited: Get a Glimpse at the ‘Invisible Woman’

The Fantastic Four’s Sue Storm takes the spotlight! See what other fresh arrivals hit the digital comics mega-library this week.

New This Week in Marvel Unlimited: The Most Epic Thor Event Ever Comes to a Close

Read the globe-spanning ‘War of the Realms’ in full with the digital comics mega-library!

New This Week in Marvel Unlimited: Digital Comics to Binge Through the Holidays

This week’s additions will fill you with cheer!