As we prepare for the next X-Event, Ewing celebrates Grant Morrison’s seminal run on ‘New X-Men.’

Change is the constant, especially in the Marvel Universe. The X-Men exemplify that by shaking up the status quo every few years. However, there are major paradigm shifts that still stand out among the vast number of X-Men stories. Later this summer, Jonathan Hickman is sending the X-Men into a new era with HOUSE OF X and POWERS OF X – and the early indications are that Hickman is going to redefine the X-Men as we know them.

To celebrate the new beginning for the franchise, several of Marvel’s prominent comic creators are reflecting back on the X-MEN runs that mean the most to them. Writer Al Ewing has chosen NEW X-MEN, the three-year run of writer Grant Morrison. Back in 2001, the X-Men books were in a bit of an identity crisis. Chris Claremont had left the series for a second time, and a few fill-in issues killed time before Morrison took over the previously adjectiveless X-MEN series with NEW X-MEN #114. 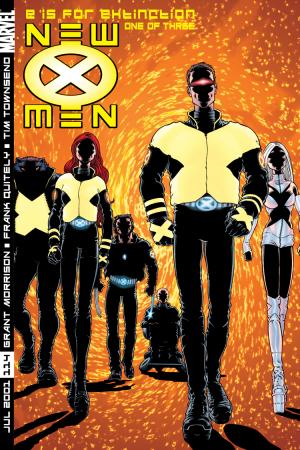 Morrison personally designed the NEW X-MEN logo which could be flipped and still retain its meaning. He was joined by artist Frank Quitely, who gave the X-Men a more contemporary look that moved away from traditional costumes. Spandex was out and black leather was in – but the changes were more than just cosmetic. Morrison and Quitely whittled the main cast down to Wolverine, Cyclops, Jean Grey, Beast, Emma Frost, and Professor Xavier. Yet the supporting cast exploded as Xavier’s school took on a much larger class of mutants. Quentin Quire, the Stepford Cuckoos, Beak, Angel Salvadore, Martha Johnson, and more made their first appearances in this run.

Emma Frost was also a major focus of Morrison’s stories, as he gave her a secondary mutation that turned her skin diamond hard. Frost had previously redeemed herself in GENERATION X, but this was the first time that she officially became one of the X-Men. Beast was also greatly transformed by his secondary mutation, which gave him a distinctly cat-like appearance for the next several years.

Morrison and Quitely kicked off their run with “E for Extinction,” a story that wiped out millions of mutants at the hands of Cassandra Nova, a new villain with ties to Professor Xavier himself. Morrison also put the focus on mutant society and culture, which was becoming more prevalent than ever before. Humanity was facing extinction within just a few years, and for the first time, mutants would inherit the Earth.

That led to Xorn, one of the most controversial additions to the X-Men. Xorn initially presented himself as a healer who helped Xavier regain control of his legs. But in reality, Xorn was Magneto, Xavier’s long-time rival. Magneto survived the massacre at Genosha and began training a new generation of the Brotherhood of Mutants under Xavier’s nose. Later stories retconned Xorn as an imposter Magneto, which essentially exonerated Magneto of Xorn’s crimes. But within the stories as written, Magneto has rarely been more dangerous or terrifying.

This was also an era that was defined by the drama within the team itself. Cyclops had recently returned from being merged with Apocalypse. He became withdrawn from his wife, Jean, and had a psychic affair with Emma. That became particularly dangerous for everyone involved when Jean’s connection with the Phoenix began making her less and less human.

While Quitely didn’t illustrate every issue in Morrison’s NEW X-MEN, his unique visuals gave this era its flavor. Phil Jimenez was among the contributing artists and he drew “Planet X,” the penultimate story of Morrison’s NEW X-MEN. That pit the team against Magneto, seemingly for the last time. This was also a battle that Jean wouldn’t walk away from. Strangely enough, Jean’s death in NEW X-MEN #150 actually lasted longer than her demise in the classic X-MEN #137.

X-Men legend Marc Silvestri returned to the franchise for Morrison’s final tale, “Here Comes Tomorrow,” which gave us a look at the X-Men far into the future. Despite her death, Jean still played a major role in this story. She even essentially gave her blessing to Cyclops and Emma to reopen Xavier’s school as co-headmasters. But that’s a longer story for another time.

In just three years, Morrison had left a major mark on the world of the X-Men. This July, it’s Hickman’s turn in HOUSE OF X #1 and POWERS OF X #1!

Stay tuned to Marvel.com for more news and updates on HOUSE OF X and POWERS OF X!

In this article: New X-Men, X-Men