AVENGERS: EARTH’S MIGHTIEST HEROES II by Joe Casey and Will Rosado focused in on the world’s greatest super squad not long after Black Panther joined the squad in AVENGERS #52. At the time, Giant-Man lead the team alongside fellow founder The Wasp and the likes of Hawkeye, Black Panther and another newcomer, The Vision.

The synthezoid's addition to the team caused a fair amount of concern with both the public and S.H.I.E.L.D. The former remained unconvinced that a robot would have humanity’s best interest at heart while the latter worried that he might still have hidden, nefarious intentions from his days as an Ultron-programmed assassin.

While T’Challa participated in Avengers adventures, he also experienced a variety of personal achievements, changes, and challenges. After accepting membership in the United Nations, he gave a speech explaining that Wakanda has much to offer the organization, but will not participate in any wars or violence: “[If] we are to become the true global village this general assembly aspires to be, it will require honest, vigilance and, above all else, empathy for our fellow man.”

Instead of moving forward as a politician on that huge stage, T’Challa adopted an identity known as Luke Charles and began teaching in a Harlem school. When asked why someone as qualified as himself would want to teach in such a place, he explained that the kids deserve the best. Mr. Charles soon came to worry about a picked-on boy named Delroy who he saw as a ticking time bomb, but he also worried about a contingent from Wakanda who wished him harm to the point where they hired an assassin called the Death Tiger to kill their king. 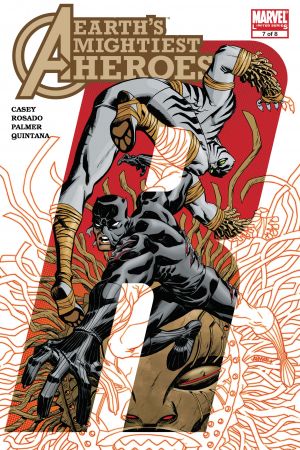 Both of these concerns happen to come to a head at the exact same time. As Delroy checked the gun he brought with him to school, the Death Tiger attacked Luke Charles. Their battle began in the classroom and soon traveled out to a nearby alley. With the teacher lying on the blacktop in the rain and the villain standing over him with knife raised, shots ring out and the Death Tiger fell. T’Challa turned to see his savior: Delroy.

The Black Panther revealed his true identity to the boy after the latter was taken into custody. T’Challa called Delroy’s actions an example of “the slow decay of our community.” The king then explained that the young man will have to accept the consequences of his actions, but remained confident that Delroy would come out on the other side even stronger.

After helping the Avengers take out the Super Adaptoid, Mr. Charles returned to his classroom which now lacked Delroy. There he talked about how African civil conflicts affected kids in Harlem. After dismissing the students, he told his principal that his desire to help these students remained “stronger than ever.”

If you’re curious about reading the original issues these reference, start around AVENGERS #51 when Black Panther makes his first appearance in the book and go until around #60 which marks the wildly weird wedding between Yellowjacket and Wasp.

T’Challa first used the name Luke Charles as a student in the United States as revealed in AVENGERS #77 by Roy Thomas and John Buscema. Created and authenticated by T’Challa’s uncle N’Baza, the king of Wakanda brought the Luke identity back to become a teacher in Harlem. In his new role as an educator, T’Challa attempted to instill the youth with a sense that they can achieve greatness while also informing them of African history.