Shuri in the Savage Land

Shuri goes on a globe-trotting journey to corral Klaw!

We read through some of T’Challa’s most thrilling adventures!

In the wake of Doomwar, T’Challa agreed to fill in for Daredevil in Hell’s Kitchen, taking over his re-named book in the pages of BLACK PANTHER: THE MAN WITHOUT FEAR. That left Shuri to continue acting as the leader of Wakanda as seen in Jonathan Maberry, Gianluca Gugliotta and Pepe Larraz’s four-issue limited series KLAWS OF THE PANTHER from 2010.

As you’ll remember, T’Challa destroyed all of the processed Wakandan Vibranium in the world to stop Doctor Doom from becoming all powerful in DOOMWAR. So, it came as an even bigger surprise when Klaw and A.I.M. began stealing all the other types of Vibranium found in places like the Savage Land.

The Black Panther discovered this after heading to that prehistoric place at the behest of Ka-Zar, who’s nowhere to be found when she shows up. However, she receives a greeting from Shanna, Ka-Zar’s mate sometimes known as the She-Devil. The two eventually found Ka-Zar who had been put under some kind of mind control thanks to a disc they also found on a number of creatures in the Savage Land. 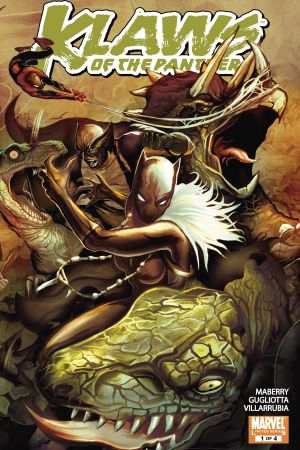 After facing Klaw, Shuri met with Wolverine in an attempt to get a hold on her wilder nature. Logan also helped the Panther get some information she needed, but advised the young woman not to give in to that side of herself.

Continually tested in that regard, Shuri headed to New York City where she teamed up with the only available Avenger: Spider-Man. Before long, they got the inside scoop on Klaw’s plan. He kidnapped the daughter of a higher-up at A.I.M. and turned her into a Multiframe Universal Sonic Integration Codec—M.U.S.I.C. for short—that would allow him to use the Antarctic Vibranium to take over the world.

Having none of that, Shuri, Spider-Man, and Black Widow work like crazy to stop Klaw’s plan. Even though it seemed like killing M.U.S.I.C. would be the only way to halt the plot, Shuri refuses and that act of kindness inspires the young woman to use her own powers to stop Klaw and turn the tables.

For a few years, Shuri became a major part of the Marvel Universe and gained a great deal of respect as The Black Panther. But, all good things must come to an end. After Namor attacked Wakanda in Avengers Vs. X-Men, she declared war on Atlantis, nearly destroying the undersea kingdom in the process. Namor eventually joined the evil Cabal and aimed their forces at Wakanda during an attack seen in NEW AVENGERS #24. Considering their home already dead and gone, she stayed behind to fight Proxima Midnight even though she did not survive the altercation as confirmed a few issues later when her spirit appeared along with the other Black Panthers.