The Panther Once More

T'Challa meets the Panther God on the way to renewed greatness!

You can’t keep a good hero down for long. Even though T’Challa never truly stopped doing good for both his people and the world, he spent the period before and after Doomwar hoping to get back to his role as Black Panther. However, to do so would either mean that his sister Shuri had died or that he would overthrow her in ritual combat, neither of which he desired.

And then came FANTASTIC FOUR #607 and #608 by Jonathan Hickman and Ron Garney in 2012. In the two-part story, called “Inert,” T’Challa invited Reed and Sue Richards to visit his homeland. Though Mister Fantastic assumed Wakanda required financial assistance after T’Challa destroyed all of the processed Wakandan Vibranium in DOOMWAR, he in fact needed someone to accompany him on a mission of grave importance.

As the visitors soon came to understand, Wakanda had recently been attacked several times by undead warriors. This led T’Challa and Reed on a journey to Necropolis, the ancient city of Wakandan dead while Sue, Shuri, and Storm sought out the panther god for advice, but instead battled the death god Anubis. 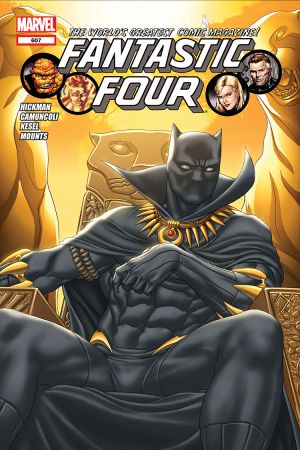 While talking to the actual panther goddess, T’Challa admitted that he desired to become kind Black Panther once again. Instead, the goddess offered him another option: to become the ruler of Necropolis. With the new title came a return to power as well as a new, yet classic Black Panther costume.

Hickman went on to continue these stories in the pages of NEW AVENGERS and AVENGERS leading directly into Secret Wars! He also created an even stronger bond between Reed and T’Challa witnessed by the Panther goddess. After the former stood up for the latter in front of the deity, she revealed that the two now shared intertwined fates.

While Reed and Sue headed off on their missions, the kids of the Future Foundation had their own adventure in Wakanda as seen in FF #19 by Hickman and Gabriel Hernandez Walta. While riding elephants, the group stops at a the Wakandan Reservoir only to find the corpse of a Hyena Clan member. Investigating it led to the whole nomadic clan teleporting to the kids’ location. They planned to steal the water, but instead got their butts handed to them by a bunch of children! This adventure also resulted in Wakandan child genius Onome joining the Future Foundation.