Black Panther and the Ultimates

In the wake of Secret Wars, plenty changed in the Marvel Universe. We’ll get to T’Challa’s own series, but today we shine the light on his new team: the Ultimates. The first five issues of ULTIMATES by Al Ewing and Kenneth Rocafort set up the group—consisting of Panther, Captain Marvel, Blue Marvel, Ms. America and Spectrum—as “the ultimate team to solve the ultimate problems.”

The first problem tackled? Curing Galactus of his hunger! To do so, part of the squad tracked down the Devourer of Worlds’ original incubation chamber. Meanwhile, the Marvels attempted to explain their plan to Galactus as T’Challa traveled by way of Translocation from Earth to the cosmic meeting place.

Along the way the Panther relived his own history as well as Galactus’ previous life in the Sixth Infinity. Together he and his team used that knowledge, their own intelligence, and the incubator to finish his birthing process bringing about a new being: Galactus, the Lifebringer!

As you might expect, this kind of move brought about a great deal of questions, confusion, and even anger from other space races, but that didn’t stop the Ultimates from attempting their next big mission: fix time from outside of time.

This one didn’t quite work so well, but it did see the return of Anti-Man, a trip to The Neutral Zone, a save from Galactus, the reveal that someone chained Eternity, and the escape of Thanos.

Black Panther first appeared in ULTIMATES while on the Triskelion. He explained to a visitor that the New York City building tripled as the Wakandan embassy and the headquarters for both the Alpha Flight ground crew and the Ultimates. This version of Alpha Flight defends Earth from extraterrestrial threats partially on-planet and partially from the Low-Orbit Space Station. The team, led by Captain Marvel, consists of Puck, Aurora, Sasquatch, and Abigail Brand. 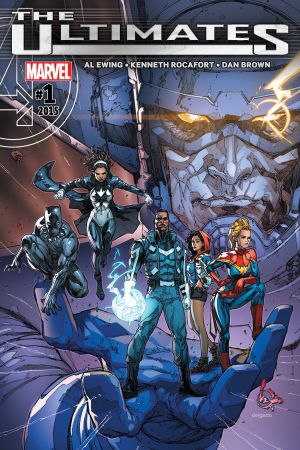 buy
What is Marvel Unlimited?
Who is the Black Panther? | Marvel TL;DR