The Silver Surfer! Even simply stating his name sends that ol’ cosmic tingle sliding right up our spines! And good thing, too, because the spacey surfer dude’s hitting our atmosphere with not one, but two new books next week, namely SILVER SURFER: BLACK #3 and SILVER SURFER: THE PRODIGAL SUN #1—it’s like Surferpalooza or something, Sam!

So, you know how this goes by now: We have our titanic topic, and we jump right in to the water to catch a wave…

We Earthlings first caught sight of the Silver Surfer in the now-classic FANTASTIC FOUR (1961) #48, a shiny stalwart on a nutty cosmic surfboard who rode out in advance of his master Galactus to announce the Big G’s arrival on our planet. Heckuva job if you can get it—but the thing is, he wasn’t the first to play herald.

Eons before, Galactus—his friends call him the World-Devourer—created a machine in his image called Tyrant just as he was dreaming up the idea of a herald, as told in SILVER SURFER (1987) #81. In what would become a tradition with the Big G’s lackeys, Tyrant rebelled, was stripped of his powers, and got banished from his master’s sight. Long time later, he wound up on the wrong end of the Ultimate Nullifier, which we can assure you is nothing to wish on your worst enemy, bunky.

Then, sure he could correct any more coming catastrophes, Galactus tries it again with the so-called Fallen One and—you see this coming, right?—history repeats and the big lummox has to get rid of that herald, too. Some time down the road, the Fallen One became Thanos’ herald and got himself killed by some gods or something. Listen, when you’re named “the Fallen One” you sort of have your path laid out for you, huh?

Didja Know… the Surfer struck up a romance with the first normal human he ever encountered on Earth?

Hoohah, what a sordid story! After taking a beating during a tussle with Earth’s champions, the Surfer crash-landed into the apartment of a certain blind sculptress in FANTASTIC FOUR (1961) #49. Her name? Yep, none other than Alicia Masters, the Thing’s girlfriend! And then thing’s got really interesting.

Alicia laid it out for the cosmic cut-up and her wit and wisdom actually sunk into that silvery hide of his, so much that he turned on Galactus to protect the people of Earth. The Surfer paid heavily for his feckless, futile folly, but he never forgot Alicia’s sage advice.

Years later, in SILVER SURFER (1987) #123, the wild wave warden returned to Earth and dove straight into some amazing adventures with Alicia, who wasn’t with the Thing at the time. This all led to l’amour and the dear lady soaring out into space with the Surfer…until he decided to throw back in with the Big G and turn his back on Earth once more. 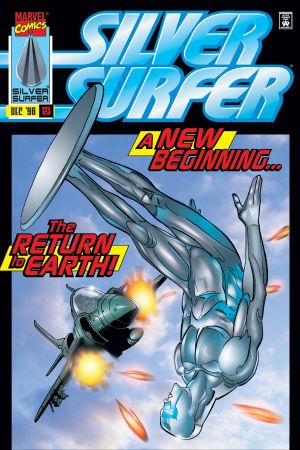 Didja Know… the Surfer became a founding member of the Defenders?

Oh, we hear ya howling, you nutty Didja Know Diehards, ‘cause you always see the Silver Surfer at all those daring Defenders reunions, but once upon a time you’d almost never figure him part and parcel of the most famous “non-team” of all. Why? Well, he was hardly ever there, True Believers!

Namor the Sub-Mariner and the Hulk bounced around a bit, helping each other out for a few issues, but the Surfer didn’t swoop down into the mix until SUB-MARINER (1968) #34. That terrific trip became known as the Titans Three and clapped the kibosh on a few no-goodniks, but it took the arrival of Doctor Strange to pull them together as the dynamic Defenders….though the Surfer was still a hit-or-miss proposition, pal. 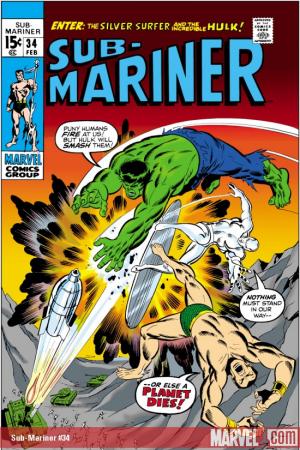 He “officially” joined the non-team in DEFENDERS (1972) #2, left them in DEFENDERS #3, came back for more lumps in DEFENDERS #6—just in time for the infamous first Avengers/Defenders War—and then scooted back to space again in DEFENDERS #11. It’s just his way, we surmise, but when he’s here, the Silver Surfer’s on it, baby! Cowabunga, dude!