Hey, all you mighty Marvelites out there! We thought we’d get a little hammy for the final installment of our four-week-long tribute to the amazing animals of the Marvel Universe (read the Cosmo, Ratatoskr, and Jeff the Land Shark editions now!)--what? You think we’re adding a bit too much pork to this peerless, pulse-pounding package of perfidy?

Well, you’d be right! How else could we slip in a little surprise solicitude for the one, the only Spider-Ham?

Ah-ha, now we’ve got your attention, True Believers! That’s right: Peter Porker returns in the all-new SPIDER-MAN ANNUAL #1, and a pig in a poke fits nicely into our titanic theme…

So as they say, let’s take a roll in the mud and see what comes out in the laundry, eh?

Didja Know… Spider-Ham isn’t a pig at all?

Sure, he looks like a prize ham and all, even has the snout to prove it, but in reality—which reality we’re not sure—he was born a spider!

It all occurred in MARVEL TAILS STARRING PETER PORKER, THE SPECTACULAR SPIDER-HAM many Marvel moons ago now, but we remember it like it was just yesterday. Peter the spider lived in the basement of a snappy scientist named May Porker who’d invented a kind of atomic hairdryer thingie and tried to try it out on herself, but as things go in a world of anthropomorphic animals, instead of terrific tresses she got irradiated.

And then she bit Peter.

Peter, of course, turned into a pig, but not just any pig! He became a pig with the proportional strength of a spider! From there he did what any red-blooded spider-turned-pig would do: dress up in a costume and fight crime. Don’t say you wouldn’t, Charlie! Anyhow, from there ol’ Spider-Ham gained a whole bunch of enemies like Ducktor Doom, the Green Gobbler, the Buzzard, Bull-Frog, and our personal favorite, King-Pig.

You might say he brought the hammer down on a whole hamper of ham-fisted hamburger-heads.

Our pal Peter Parker woke up to a world of woes in the now classic AMAZING SPIDER-MAN (2014) #9 and knowledge of not one, not two, not even ten universes full of fearless Spider-Men—Mans?—but infinite realities of ‘em! And one of those universes just happened to belong to, yep, you guessed it…Spider-Ham.

Peter Porker arrived alongside such allies as Spider-Man UK, Spider-Man 2099, and even the Spider-Girl of an alternate future, and just in time, too. Seems a gruesome ghoulie named Morlun and his fearful family the Inheritors liked to trip around the universes killing Spider-folk, and this was enough to bring Parker and Porker together to make bacon out of ‘em.

Didja Know… Spider-Ham died and came back to life when he met Deadpool?

We know what you’re saying and we totally get: Doesn’t Deadpool slay everybody with his manic mirth and mercenary mouth? Well, sure, Sally-Lou, but we mean that Peter Porker, the dear boy, really died and came back in DEADPOOL: TOO SOON? (2016) #4! 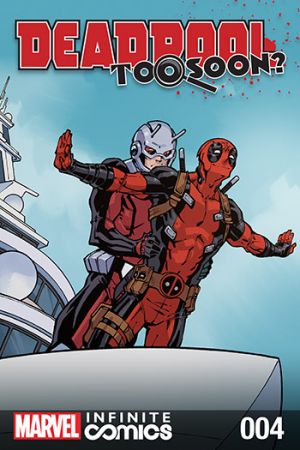 See, it all started when someone started slipping a mickey to all the frantically funny characters in the Marvel Universe, starting with Forbush-Man…and then it all went downhill from there and…hmm.

Maybe you’d better just check this one out for yourself. You Spider-Ham fans among us will thank us!

Who Wields the Shield: The Many Versions of Captain America

Get to know the Sentinel of Liberty from across the Marvel Multiverse!

Dan Slott, Gerry Conway, and more present the inside story of the Multiverse!

From an everyday spider to the sensational Spider-Ham! Peter Porker's ready to punish some punks in Marvel Contest of Champions.