Didja Know... The Hidden History of the Silver Surfer

Well, True Believers—it’s happened. In our rush, our drive, our very zeal to cover the length, breadth, yay, even yon imponderable depths of the mighty Marvel Universe of characters and concepts, we’ve yet to touch upon one of the most significant, most special, most space-faring one of ‘em all, the shiny Silver Surfer.

Forthwith, we shall now peer into the past of that bountiful board-bearer and pull out a few factoids from his earliest efforts in the pages of yon Marvel funnybooks.

Sure, some of you Marvelites out there are saying, “Well, when the Big G himself snaps his dauntless digits, you jump!”…but it wasn’t really like that, Effendi. See, back when the Surfer oraculated on his origins in SILVER SURFER (1968) #1—kinda catchy title, huh?—we discovered it was all his idea.

Our guy began life as a dude named Norrin Radd on the far-flung planet Zenn-La, of course, and used to waltz around wringing his fingers over how lazy and lax his people had become. Just about the time he’d hit his height of being down, Galactus showed up and set out his picnic basket for a little feast. And Norrin, conscientious crusader he was, took a hand in the matter.

What did he do? The Big G kvetched a bit about not having a herald as a helpmate and if he did he could avoid popularly populated planets like Zenn-La…and Mr. Radd raised his hand—we just said that, didn’t we?—and volunteered for the job. Imagine, amigos! Telling the Devourer of Worlds you’ll be his restaurant critic! Ah, well; he saved Zenn-La, though he got chromed in the deal. 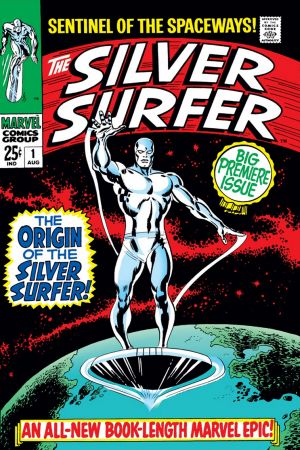 Yep, went out on a limb and everything to…wait, you don’t wanna hear our bad jokes. You want us to just dish with the deets, Daddy-O, and dish we will, ‘cause when a computer starts tap-dancing, we call that a comic book and our job here is done.

In a back-up story in FANTASTIC FOUR ANNUAL (1963) #5, the Silver Surfer enjoyed his very first solo story ever anywhere, but gained a frightening new foe in the bargain. Sensing an abundance of anguish and torment in his immediate area, the Surfer happened upon an Artificial Intelligence built and abandoned by the Mad Thinker.

Codenamed Quasimodo—which stands for “Quasi-Motivational Destruct Organ"—the computer poured out its problems on his would-be savior, and told him the only thing that’d make his sourpuss face happy would be to have a human form…and so that’s just what the Surfer gifted him with. And then ol’ ‘Modo the Machine turned around and bit the hand that transformed him. Hey, it happens! Our office microwave just demanded weekends off! 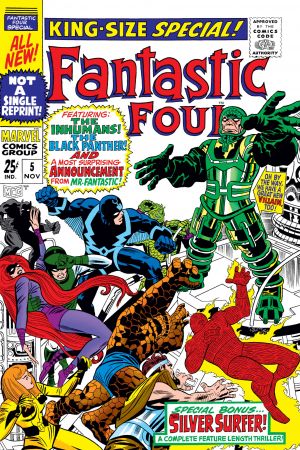 Didja Know… the Silver Surfer once punched it out with a pack of Yetis?

Well, here it is, Frantic Ones—what you really came for. You’ve suffered through another column of our crazed cavorting and expect a reward at the end, and so we deliver. Take your seats again and we’ll tell you a truly terrifying tale.

Remember when we told you about the board-rider babbling about his beginnings in SILVER SURFER #1? Well, get this: in the middle of it all he took the time to tussle with some Abominable Snowmen, otherwise known as Yetis. And boy was it a beautiful battle…because it was beautifully illustrated by Big John Buscema, that’s why.

See, the Surfer sailed into a polar zone and stumbled upon the yetis. He thought of them as “hunted” and “hounded” just like himself, but they must’ve thought of him as a big ol’ ice cream treat, ‘cause they jumped him and didn’t stop until he distracted them and did a silver skedaddle. While the Surfer floated away, he reckoned the snowmen to also be like humans in that their hearts were also filled with fear and distrust…and therein lies our tale, friends. Be well!

In this article: Silver Surfer

For the sake of the Multiverse! Read our top 5 takeaways from ‘Defenders’ #1, now on Marvel Unlimited.