New costume! New job! New life! But the same ol’ Jessica Drew…maybe? We’ll find out together, True Believers, when we face front and dive into the all-new SPIDER-WOMAN #1!

That’s right—we’ll be right there beside you as you explore the explosive events that lead the dishy Drew down new roads of danger, destruction, and distraction!

Hmm, just like how we’ll be your bosom buddies as we crack open a new can o' Didja Know, which just happens to be about—you guessed it!—Spider-Woman!

Didja Know… SpidEr-Woman once believed she was an actual spider?

Okay…arachnophobes can exit right here, but the rest of us can brave these wondrous webs, all right? So, things were a bit different back in MARVEL SPOTLIGHT (1971) #32 when Spider-Woman debuted. Didja Know she was known as “Arachne” in those days? Sure, that mighty moniker didn’t last too long, but it certainly fit a woman who thought she was an evolved arachnid!

See, originally Spider-Woman believed everything her Hydra handlers told her about her origins…’cause why would Hydra lie, right? The story went that she was one of the High Evolutionary’s “New Men,” those super-advanced beings with the speeded-up evolution effects. It wasn’t until her very next appearance, in MARVEL TWO-IN-ONE (1974) #30, that the whole big ball of yarn began to unravel.

By the end of Spider-Woman’s titanic tussle with the Thing in MARVEL TWO-IN-ONE (1974) #33, she’d entered into a kind of magical mentorship under Modred the Mystic—remember him, heroes?—and he split the systemic silliness of such an origin right down the middle. In SPIDER-WOMAN (1978) #1, Jessica Drew—as she was so named then—learned her true tale of being exposed to both radiation and spider DNA and her eventual evolution into the hero we all know and love!

Didja Know… Spider-Woman once had powers to make people mad?

Not mad as in cray-cray, but mad as in angry—like, people around Jessica didn’t like her and no one, including Jessica, knew why! Not at first, at least. You see, she needed to learn it all came down to a powerful phenomenon called pheromones. And in SPIDER-WOMAN (1978) #13, she had ‘em in spades.

Didja Know Jessica once referred to the annoying effect as her “Spider Aura”? Laugh now, but back then it was a serious situation and she resorted to popping special pills to mask the pheromones in SPIDER-WOMAN #17. And where did she first try out this terrific tonic for her troubles? At a disco, of course! Hey, it was 1979 after all!

These days, Spider-Woman’s “Spider Aura” seems to have slipped into the shadows, but she’s still resistant to such nasty negativity as radiation, poisons, toxins, and the like, due to Jessica’s unique personal chemistry. She’s like a walking, talking science project! 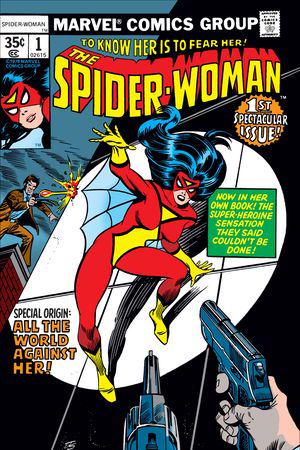 Didja Know… Spider-Woman kicked off an entire line of Spider-Women?

It’s the way of the world, Marvelites: You get something good going and everybody’s gotta muscle in on the action! Why, take Jessica Drew for example…she’s not the only Spider-Woman to flip, flop, and fly through the hallowed halls of the House of ideas, nossir!

After our darling Drew came Julia Carpenter, the spider who debuted in SECRET WARS (1984) #6 and not only became the second Spider-Woman, but also the second Arachne and the second Madame Web! After her we have Mattie Franklin, the third Spider-Woman who launched in AMAZING SPIDER-MAN (1963) #441 as the Spidey fangirl who graduated to the big leagues.

Let’s see…following Franklin we have Charlotte Witter who vamped it up as a villainous Spider-Woman in AMAZING SPIDER-MAN (1999) #5. She was mutated by Doctor Octopus and actually acquired the powers of Jessica, Julia, Mattie, and Madame Web at one point! Whew—and we haven’t even mentioned the Skrull Queen who masqueraded as Jessica Drew or the Mary Jane Watson versions of Spider-Woman! Oops, I guess we just did...

Peruse these eye-poppin' publications with Marvel Unlimited right now! Then pick up SPIDER-WOMAN #1 via digital download on Wednesday, March 18!

In this article: Spider-Woman (Jessica Drew)

Prepare for political intrigue, some swinging Spider action and more in this week's new comics!

Check out what 'Devil's Reign' will unleash on Marvel Comics this January!