T’Challa experiences a reality-warping adventure with the Avengers and meets Everett Ross!

Attacked unexpectedly by Asgardian creatures in AVENGERS #1, the Black Panther sought out his former teammates to join them in battle against Mordred and the evil Morgan le Fay. The wily sorceress whisked the heroes away to a world of her creation in AVENGERS #2, and shorn of his memories of Earth, T’Challa became the Nubian Prince, a warrior in Morgan’s personal guard, the Queen’s Vengeance.

Captain America regained his proper memories and attempted to convince the Panther and the others of their rightful places. When Wonder Man reappeared to turn the tide in AVENGERS #3, T’Challa and his comrades returned to their own true selves upon Morgan’s defeat. Later, at Avengers Mansion, he witnessed Cap’s awkward try-out of his new shield in CAPTAIN AMERICA #3. 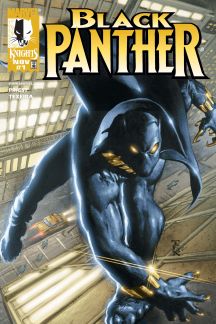 Ultimately, T’Challa declined membership in the newest incarnation of Earth’s Mightiest Heroes in AVENGERS #4, citing his important Wakandan duties. Not long after, he aided Ka-Zar in returning to the far-off Savage Land in KA-ZAR #17, and upon his own return to his native Wakanda, the Panther accepted help from Cable in a battle against Klaw in CABLE #54.

His beloved country in turmoil, T’Challa reluctantly left it behind to fly to New York City in BLACK PANTHER #1 to open an investigation into the Tomorrow Fund, a non-profit charitable organization to which Wakanda contributed. There, the Panther made the acquaintance of Everett Ross, his American liaison to Wakanda, in BLACK PANTHER #2, and continued his investigation while Ross dallied with the demonic Mephisto.