T’Challa goes up against Killmonger with the highest stakes yet!

While The Black Panther tracked down the villainous Hydro-Man in BLACK PANTHER #14, his friend Everett Ross settled into his new position as regent to Wakanda. Later, Ross found the job to be fraught with danger as The Hulk appeared during a ritual elephant hunt in INCREDIBLE HULK #15.

T’Challa continued his search to find old foe Erik Killmonger in BLACK PANTHER #16, while back in Wakanda, Killmonger met with Ross and revealed his plan to take over the nation. The Panther mused briefly on the news of Sue Richards marrying Doctor Doom in FANTASTIC FOUR #27, and then joined Luke Cage, Iron Fist, and The Falcon to battle Killmonger’s Harlem-based agents in BLACK PANTHER #17. 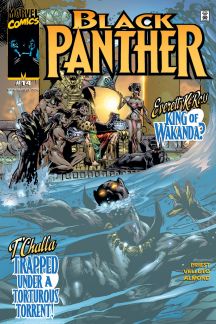 Still weakened from his ordeal, T’Challa held off an attack by Malice in BLACK PANTHER #24, and Killmonger lost his life while attempting to secure the heart-shaped herb that allows the Black Panthers their strength and abilities. In BLACK PANTHER #25, T’Challa and Ross dealt with the global Maximum Security situation of aliens designating the Earth as a prison world.