Kasper Cole takes on the 66 Bridges gang while T’Challa clashes with The Red Skull!

Cole discovered a crooked cop called for the hit on his dad in BLACK PANTHER #54, while another police officer looked into the new Panther’s identity. Cole gained info on the mysterious Kibuka of the 66 Bridges in BLACK PANTHER #55, unaware of a net closing in on him. Finally, together with T’Challa and The White Wolf, Cole took down the corrupt cops in BLACK PANTHER #56 and accepted a promotion in the police department to rank of detective.

Teaming up with The Falcon in BLACK PANTHER #59, Kasper searched for the kidnapped son of a fellow cop. Learning that the case involved the 66 Bridges gang, he attempted the ancient Wakandan Rite of Ascension to gain more power in BLACK PANTHER #60. T’Challa’s longtime foe Erik Killmonger fought Cole for the title in BLACK PANTHER #61, but then awarded him a synthetic version of the heart-shaped herb which bestowed the Panther’s abilities on a worthy person. 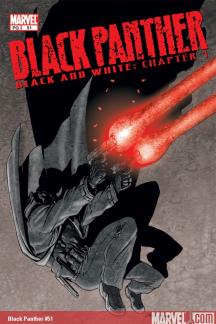 Now powered, Cole once again leapt onto the trail of the missing boy in BLACK PANTHER #62, only to discover the case completed by a restored T’Challa. Later, impressed with his diligence, the true Panther urged Cole to take on the mantle of the White Tiger.

T’Challa looked into the mystery of the red cloud of death bacteria over the Dakotas in AVENGERS #66, but when he and Tony Stark learned of its origin as a bio-weapon, they found themselves locked out of their government lab by The Red Skull posing as Secretary of Defense Dell Rusk.

The Panther continued his quest for a cure in AVENGERS #67, but ended up a prisoner of the United States when Rusk sent soldiers to subdue him and Stark. After being freed by Iron Man in AVENGERS #68, T’Challa made his way to Rusk’s office in AVENGERS #69 to overhear the Red Skull’s plot to frame Wakanda for the spreading plague. In AVENGERS #70, the Black Panther fought the Skull one-on-one and won the day, as well as an antidote for the deadly bacteria.