T’Challa finds himself on hand for the worst day in Avengers history!

With lingering differences from their previous mission, Black Panther and Earth’s Mightiest Heroes witnessed the death of Jack of Hearts in AVENGERS #76, as well as the continued splintering of their teamwork. Later, in IRON MAN #75, T’Challa joined with his comrades to discuss whether or not Tony Stark should resign from the Avengers due to his new position as Secretary of Defense.

Stark arrived at Avengers Mansion in IRON MAN #84 to discuss matters with the Panther and others, but instead continued on a secret mission to recover a deactivated android from the building’s basement. When it accidentally activated in IRON MAN #85, T’Challa fought alongside his teammates to block the rampage. 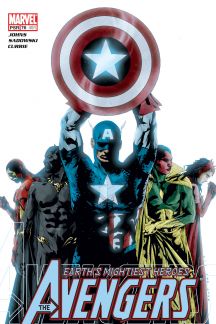 At a full meeting of the United Nations, T’Challa placed himself between an unstable Tony Stark and the Latverian ambassador in AVENGERS #500, unaware of the simultaneous destruction of Avengers Mansion. Standing with his fellow heroes, The Black Panther approached the smoldering ruins in AVENGERS #501 to seek answers to troubling questions over the incident.

The Kree alien warrior race attacked the gathering in AVENGERS #502, prompting T’Challa to join in the fight. Hawkeye nobly sacrificed himself to save his teammates, and after the Kree retreated, the Panther heard Doctor Strange and Captain America deduce the culprit behind the heinous act in AVENGERS #503.