T’Challa and Storm navigate their way through Civil War and join the Fantastic Four!

Set up by Tony Stark, T’Challa and Storm found themselves waylaid by Iron Man and the Sentinel Squad in BLACK PANTHER #22. When our heroes refused to leave the U.S. until the Civil War between Stark and Captain America ended, the situation worsened.

Smarting from a vicious media spin on him and an attack by Black Widow in BLACK PANTHER #23, the Panther sought out Cap for answers while Storm contacted Reed Richards in BLACK PANTHER #24. When the final battle between Iron Man and Cap’s forces occurred in BLACK PANTHER #25, T’Challa and Storm fought at the resistance movement’s side until Steve Rogers surrendered in CIVIL WAR #7.

With the Wakandan Embassy destroyed, Reed invited the Panther and Storm to live at the Baxter Building in BLACK PANTHER #26, and in FANTASTIC FOUR #543, he introduced them to The Thing and The Human Torch as the newest members of the team. 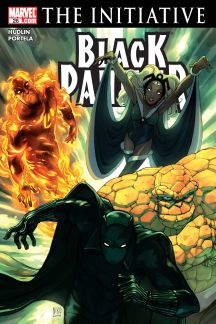 The Panther and Storm returned to Earth with Ben and Johnny in BLACK PANTHER #27 to find a Negative Zone monster running around the Fantastic Four’s headquarters. When T’Challa activated the Solomon Frogs to transport it away, the entire team ended up on an alien world controlled by the Skrulls. The aliens attacked them in BLACK PANTHER #28, but the battle ceased when a horde of cosmic-powered zombies arrived on the planet.

The Fantastic Four learned that they’d landed in an alternate reality in BLACK PANTHER #29, but that knowledge provided little help in holding off the zombies. With no recourse, they teleported off the world in BLACK PANTHER #30 just as the flesh-eating monsters began to devour everything.

After the heroes triumphed over the villains in FANTASTIC FOUR #549, Reed discovered a rift in space-time that threatened the universe itself. He gathered up Gravity and The Silver Surfer to aid the team in FANTASTIC FOUR #550, and together with T’Challa and Storm they saved Eternity from dying and in turn, rescued the entire universe.

Taking a breather, The Black Panther held off a psychic onslaught from the Psycho-Man in BLACK PANTHER #31, right before being whisked away with Thing and the Torch to another alternate reality, one with Skrulls posing as Earth gangsters.