Storm goes solo and Shuri takes on the mantel as Morlun come calling!

Turning to fight her subjugated husband in X-MEN: WORLDS APART #3, Storm contacted the Panther God after defeating T’Challa and made a pact with the deity. In X-MEN: WORLDS APART #4 she beat The Shadow King, freed T’Challa, and saw herself accepted as Wakanda’s queen throughout the nation.

The Panther attended the funeral of Sue Storm’s future self in FANTASTIC FOUR #562, and then joined with the Avengers to check in on a newly de-Hulked Bruce Banner in INCREDIBLE HULK #601. 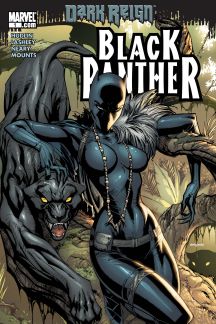 In BLACK PANTHER #1, T’Challa’s jet crashed in Wakanda, sending him into a deep coma. Wakandans turned to his sister Shuri to perhaps become the new Black Panther in his stead in BLACK PANTHER #2, and T’Challa’s mother conferred with Storm on a plan to save her son. In BLACK PANTHER #3, Storm prepared for a special mystical rite to enter the netherworld, while Shuri sought the Panther God for the transference of power. Elsewhere, the villainous Morlun rose from the dead to rampage anew.

Near death, T’Challa saw and spoke with his departed father in BLACK PANTHER #4, but the Panther God rejected Shuri for the role of Wakanda’s official savior. With Morlun swiftly approaching the capital city in BLACK PANTHER #5, Shuri defied the deity and donned the mantel of the Panther as Storm readied herself to take her husband’s place in the afterlife and allow him to return to the land of the living.

Ultimately, a Wakandan mystic managed to trade Morlun’s soul for T’Challa’s and Storm’s souls after Shuri battled and failed to stop the menace in BLACK PANTHER #6. Because of T’Challa’s necessary convalescence after his ordeal, Shuri became the true Black Panther in BLACK PANTHER #7 and fought mercenaries while on a trip to the United States.

The new Panther tracked down a Wakandan agent in BLACK PANTHER #8, and back in her home country, T’Challa underwent a strength-renewing ritual which revealed to him their true foe: Doctor Doom.