As the new Black Panther, T’Challa’s sister Shuri, drew ever closer to war with Atlantis in BLACK PANTHER #10; meanwhile, her brother sought to regain his strength and power after a brush with the afterlife. In BLACK PANTHER #11, Shuri, wearing vibranium-laced armor, clashed with Namor the Sub-Mariner while Doctor Doom tested the resolve of both T’Challa and his queen, Storm of the X-Men.

In an effort to draw out the identity of their attacker, T’Challa and Storm allowed the Wakandan government to fall to the Desturi in BLACK PANTHER #12. Elsewhere, Shuri and allies approached a mysterious island where they found a pack of super villains lying in wait for them, all part of Doom’s gambit. 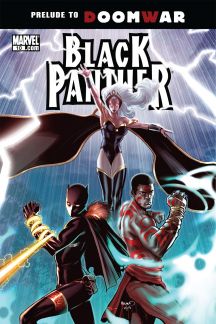 T’Challa and Shuri ultimately abandoned their native country to Doom’s minions the Desturi in DOOMWAR #1 and sought the X-Men for aid in their plight. Doctor Doom moved in to attempt to broach the vault holding Wakanda’s vibranium stores, but encountered a set-back when Shuri returned to the throne room and killed the leader of the Desturi.

With the X-Men’s help, T’Challa and Shuri continued their Wakanda assault on Doom in DOOMWAR #2. The villain himself found it impossible to crack the code on the vibranium vault, and threatened the captured Storm’s life if T’Challa would not deliver access to it. With the king choosing his queen over his country’s precious resource, Doom made off with the vibranium in DOOMWAR #3. Later, the heroes fended off an attack by robotic panthers augmented by the wondrous metal. 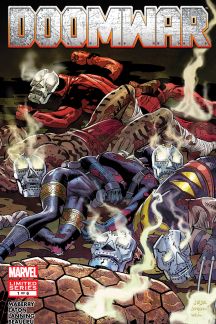 Shuri, the X-Men, and the Fantastic Four began a global campaign to track down and destroy all of Doctor Doom’s new vibranium Doombots in DOOMWAR #4, while T’Challa hired the mercenary Deadpool to track down the master manipulator himself in Latveria. Shuri and her companions hacked into Doom’s funds to distribute them to charities in DOOMWAR #5, and T’Challa helped Deadpool pinpoint the Doctor’s exact location.

The Wakandan heroes and their allies confronted Doom in his castle in Latveria in DOOMWAR #6, but discovered he’d connected himself through science and magic with all vibranium on Earth. T’Challa battled the villain one-on-one, and in a heroic yet tragic move, he chose to destroy all the Wakandan metal on the planet to deny Doom his victory.

Additionally, the packaging features characters from the film and includes a limited edition “vibranium” spoon.