Our hero fights alongside the Illuminati and discovers Original Sin!

When Shuri, the Black Panther’s sister, believed T’Challa to be conspiring with Namor, Wakanda’s greatest enemy, she banished him to the Necropolis in NEW AVENGERS #12. Later, the Illuminati built a device to view incoming “incursions,” invasions by other universes, in NEW AVENGERS #13, and the Panther saw the death of two alternate versions of himself.

Armed with more information about The Black Swan, gleaned in NEW AVENGERS #15, T’Challa discovered a group of champions not unlike him and his fellow Illuminati in NEW AVENGERS #16. Called the Great Society, the Panther and Namor observed the team in NEW AVENGERS #17, and realized that fate intended them to meet. The Illuminati flew off to Egypt to confront the latest incursion in NEW AVENGERS #18, but Black Panther cautioned his comrades of the evil in destroying other heroes.

Upon the Illuminati meeting the Great Society in NEW AVENGERS #19, both groups debated their ability to work together to stop the clash of universes. Ultimately, the Society decided to battle the Illuminati, and T’Challa entered into combat with the hero called The Rider in NEW AVENGERS #20, while Doctor Strange cast a dark spell to summon a horrific creature. In the middle of it all, the ghost of the Panther’s father appeared in NEW AVENGERS #21 to urge his son to detonate the bomb to destroy the Great Society’s Earth, but when T’Challa refused, his father stripped him of his kingdom and status. 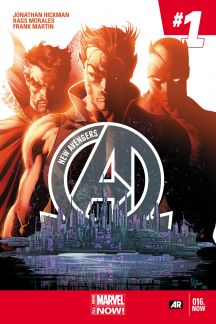 After Namor destroyed the alternate Earth, the Black Panther attacked The Sub-Mariner in NEW AVENGERS #22. Namor declared his action to be inevitable and also admitted he’d sent Thanos and his Black Order to Wakanda, which prompted T’Challa to promise to kill him. Just then, another incursion alert sounded, but the Illuminati would not rise to meet it. With the ultimate end for Earth approaching, the Panther visited his former queen Storm in NEW AVENGERS #23, and admitted they’d made a mistake of marrying. The time of incursion passed without incident, mystifying the heroes.

A shadowy figure enlisted The Black Panther to follow a trail of clues identifying the Watcher’s murderer in ORIGINAL SIN #1. Together with other heroes, T’Challa tracked the mystery to chambers below the Earth and to a satellite in orbit. There he learned of Nick Fury’s involvement in the case in ORIGINAL SIN #5, and of a secret he and Doctor Strange vowed to keep in ORIGNAL SIN #8.

Namor freed the villains held captive by the Illuminati and joined with them in NEW AVENGERS #24 to block incursions. T’Challa and Shuri attempted to seize the Illuminati’s world-destroying bombs from the Necropolis, but when the Cabal stood in their way, the Panther reluctantly left his sister behind to face certain death at their hands. In their new hideout, the Illuminati welcomed T’Challa, but the Panther brought only the bad news of Wakanda’s fall to the villains.